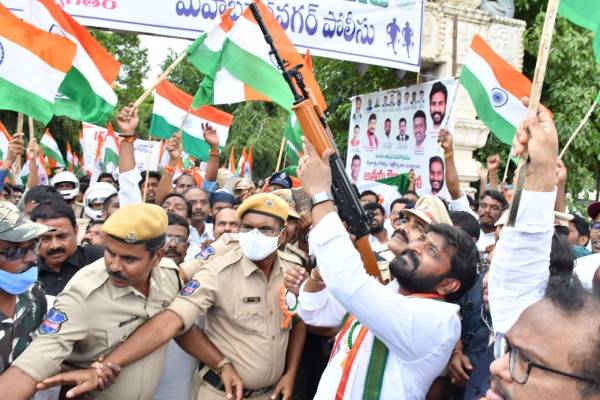 A Telangana minister on Saturday opened fire in the air to inaugurate a freedom rally as part of the ongoing celebrations to mark 75 years of India’s Independence.

Excise, Sports and Youth Affairs Minister Srinivas Goud took the self-loading rifle of a policeman to fire two rounds in the air to launch the rally in Mahabubnagar town.

The rally was organised from Zilla Parishad Grounds to Clock Tower in the town. To the surprise of everyone gathered at the starting point of the rally, the minister took the firearm of the constable standing next to him and opened fire.

The video of the minister firing in the air went viral on social media. Some netizens asked if the minister would be booked under Arms Act.

The minister has reportedly resorted to this for the second time in three days. His action triggered a row as some people say a misfire could have led to tragedy as a large number of people were present around the minister.

It was immediately not clear if the bullets fired were real or dummy bullets used for celebrations.

Freedom rallies were organised in various parts of the state on Saturday ahead of Independence Day.

Ministers, MPs, state legislators, other public representatives and police and civil officials, employees and citizens from various walks of life participated in the rallies.