Telangana Chief Minister K. Chandrashekhar Rao on Saturday directed the officials to continue implementation of the lockdown as it is, indicating that there will be no relaxation for certain sectors after April 20 as suggested by the Centre.

On a day when the state reported 43 new cases, taking Telangana’s tally to 809, the Chief Minister instructed the officials concerned to continue implementing the current methods for the prevention of coronavirus spread.

The announcement was made on Saturday night after the Chief Minister held a review meeting with top officials, a day before the cabinet meeting which is expected to take a formal decision on continuing the lockdown in its current form till May 3.

KCR, as Rao is popularly known, asked the officials to ensure that no one suffers due to hunger during the lockdown period in the state.

“Corona is spreading in the state as well as in the country. Against this backdrop, the entire official machinery should be on high alert. Don’t neglect. Since positive cases are on the rise in Hyderabad, have a strategic approach here. Administer containments properly.

“Don’t allow anyone from those areas to come out under any circumstances. Be on alert in the areas where corona positive patients are living and plan strategies accordingly. The government is ready to conduct tests and give treatment to any number of patients,” a statement from the Chief Minister’s Office quoted him as saying.

KCR also said that the poor should not suffer due to lockdown. The government has supplied rice and cash to the white ration cardholders. He asked the officials to identify the daily wage workers and extend assistance to them. 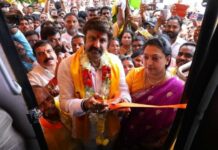