Switch to: తెలుగు
Home Politics This psycho govt should go and cycle govt should come back, says... 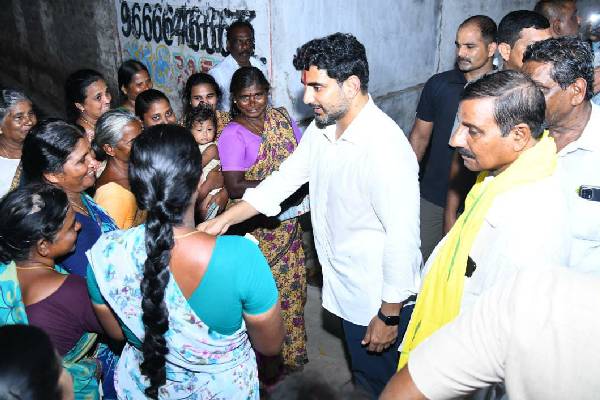 Telugu Desam Party (TDP) general secretary, Nara Lokesh, on Thursday called upon the people to re-elect the cycle to power and defeat this psycho Government to free the people from this unnecessary taxes and other problems.

Lokesh who was on his “Badude Badudu’ programme at Nutakki village in Mangalagiri Assembly segment, explained to the people the unnecessary taxes being imposed on them and the steep hike in prices of all commodities. Lokesh personally met almost all the villagers to have the first hand information on the problems they are facing.

He assured the villagers that the TDP will always stand by them and will fight for their welfare. Lokesh demanded that the ruling party MLAs give in detail the works they have taken up in their respective Assembly segments as the State government is claiming that thousands of crores are being spent for the development of each segment.

Coming down heavily on local MLA, Ramakrishna Reddy, the TDP national general secretary said that this ‘small psycho’ who could not build even a single house in his Assembly constituency, is resorting to pulling down thousands of houses in the segment.

The MLAs who could not get even a single rupee for the welfare of the people of their constituencies are imposing taxes worth hundreds of crores, he added. He promised the villagers that the TDP will certainly come to their rescue and try to resolve their problems.