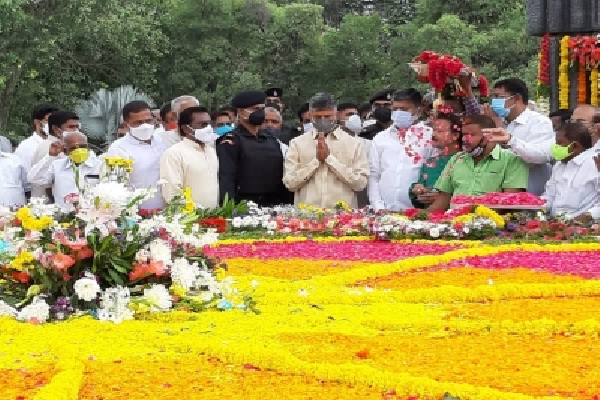 Chandrababu Naidu, who is son-in-law of the late leader, said NTR would remain as a rich legacy and heritage for the Telugu people forever.

He said the late leader would always be remembered for his contributions in politics and films. “NTR will continue to be an inspiration not only for this generation but also the coming generations,” said Naidu.

Later, addressing ‘Mahanadu’ or annual conclave of TDP via video conferencing, Naidu recalled how NTR left an unforgettable impression on the Telugu speaking people all over the world with his great achievements. Born in an ordinary family, NTR rose to the greatest heights in film and political careers and became a ‘Yugpurush’ for the people.

The TDP chief said that NTR was not just one person but an institution by himself and Naidu recalled how NTR excelled in whatever he took up and he did not merely act in the films but he actually lived in the characters that he portrayed.

After entering politics, NTR introduced many programmes that met the basic needs of the disadvantaged sections of the people. He used foresight and pragmatism in making decisions to pass on benefits to the deserving people.

Naidu asserted that NTR’s life and career had made the average Telugu person proud. Everybody should remember NTR’s contributions and draw inspiration from them to do best possible service to the people. NTR showed to the world that power and authority were not meant for one’s enjoyment but they were something that should be used to render greater service to the public.

The TDP chief said NTR never used to compromise or rest till achieving the set goals. “He made even impossible tasks possible with his determination,” said Naidu.

The TDP leader said it was Naidu who introduced the concept of Gurukul schools and launched housing schemes for poor.

NTR’s another son N. Ramakrishna released a video and said that he and his family members were unable to visit NTR Ghat for paying tributes because of the Covid pandemic.

Meanwhile, senior TDP leader and former union minister Ashok Gajapathi Raju reiterated the demand that Bharat Ratna be posthumously conferred on NTR. He recalled that the TDP founder strived for the upliftment of the backward and weaker sections and always worked for decentralization and strengthening of federal system.

NTR had launched TDP in 1982 on the slogan of Telugu self-respect and created record of sorts by coming to power within nine months, ending the single party rule of Congress in the undivided Andhra Pradesh.

He died on January 18, 1996, a few months after Chandrababu Naidu led a revolt against him and became the chief minister.