Finance Minister for Telangana Government Etela Rajender has been fined Rs 2,300 by Kazipet Railway Court Judicial First Class Magistrate P Srivani. The verdict comes after the minister agreed that obstructing the trains during the Telangana Movement is against the law.

It is known that Etela Rajender actively took part in the Telangana Movement along with TS CM KCR and other activists. As a part of their protests, under his leadership then activists blocked the trains in the Uppal Railways Station, located in Warangal at that time. He has organized ‘Rail Roko’ along with others. 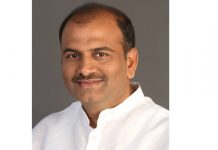