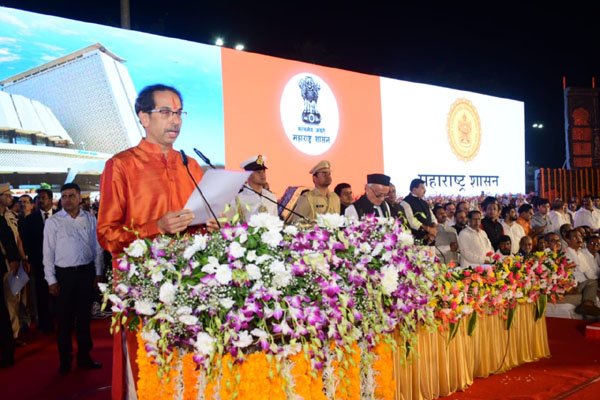 Shiv Sena President Uddhav B. Thackeray was sworn-in as the Chief Minister of Maharashtra at a colourful function held in Shivaji Park here on Thursday evening.

Governor Bhagat Singh Koshyari administered the oath of office and secrecy at 6.40 pm to Thackeray – who sported a striking saffron coloured kurta-pyjama, the Sena’s colour.

In an unusual gesture of humility, soon after completing the formalities, Thackeray, the first from the politically prominent Thackeray clan to hold the post, stepped to the front of the stage and knelt down, touching his hands and head on the floor to express his gratitude to the people of Maharashtra for the honour bestowed on him.

Thackeray is the third from the Sena to be Chief Minister after Manohar Joshi and Narayan Rane in the late 1990s.

Besides, two legislators from each of Maha Vikas Aghadi (MVA)’s constituents – the Shiv Sena, the Nationalist Congress Party, and the Congress, also took oath as ministers.

Among the prominent dignitaries present on the occasion were more than 500 farmers and farm widows from all over Maharashtra, Thackeray’s cousin and Maharashtra Navnirman Sena President Raj Thackeray, Reliance Group industrialist Mukesh Ambani, his wife Nita Ambani and their family.

Thackeray’s son Aditya Thackeray and wife Rashmi Thackeray, besides aunt Kundatai (mother of Raj Thackeray) who was seen shedding tears of joy at her nephew’s ascent as CM, were also present.

Scores of leaders, legislators, MPs and well-wishers touched Thackeray’s feet as he gracefully accepted their wishes and felicitations.

A group of Jain monks and sanyasins also turned up impromptu to pray for, wish and bless Thackeray and son Aaditya, on the stage after the oath ceremony.

Shivaji Park was transformed into a colourful sea of humanity with an estimated over 100,000 people including activists of the three MVA parties and others coming from all over Maharashtra to witness the historical event.