Stylish star Allu Arjun’s latest blockbuster Ala Vaikunthapurramlo is refusing to slow day at the US box office even after completion of second weekend. The film has now breached the elite $ 3M club by the end of Monday to emerge as the fifth highest grossing Telugu film of all time in North America. Trade circles reckon that the film is likely to end as top three earner of all time in overseas after Baahubali series. Only Rangasthalam and Bharat Ane Nenu are ahead of Ala Vaikunthapurramlo.

After a superb first week, Ala Vaikunthapurramlo had a terrific run in its second weekend. The family entertainer collected $ 212 K on Friday and notched up $ 383K and $ 330K on Saturday and Sunday respectively. With a very good Monday ( $ 165K), the Trivikram directional has joined the $ 3M club making it only the sixth film in the history of Tollywood. Trivikram’s well packaged narration and Allu Arjun’s all round performance have generated a strong buzz on the film and resulted in sensational run.

Despite heavy competition from Sarileru Neekevvaru, Ala Vaikunthapurramlo has completely dominated the overseas box office right from its premieres day. In just two, the film has emerged as the biggest hit of Allu Arjun in overseas.

Haarika Hassine creations and Geetha Arts are the production units behind this film.. 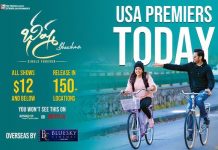 Jagan lobbying with KCR for RS seat to Ponguleti!