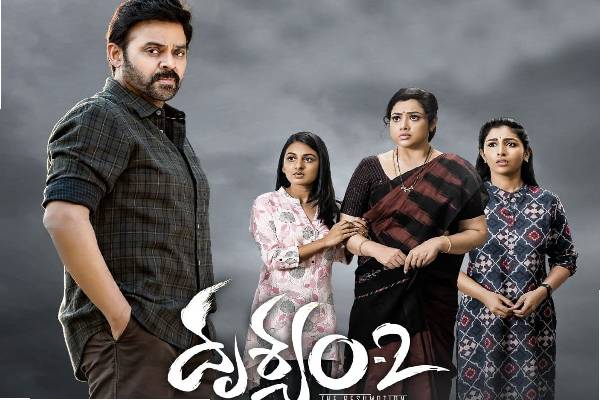 Victory Venkatesh signed the remake of Drushyam 2 which had a direct digital release. The Telugu version too skipped the theatrical release and it is now streaming on Amazon Prime. Jeethu Joseph who directed the original directed the sequel too. Venkatesh, Meena played the lead roles and D. Suresh Babu, Antony Perumbavoor, Rajkumar Sethupathi are the producers. Here is the complete review of Drushyam 2:

Drushyam 2 is the story of Rambabu (Venkatesh) who hails from Rajavaram. It has been six years since a covered crime was committed. After an incredible set of events, the cops suspect Rambabu and his family. He is traced and Rambabu boosts up his family and keeps them confident. Rambabu turns a film producer and the rest of Drushyam 2 is all about the hurdles and challenges. Watch Drushyam 2 to know about the rest.

Frame to frame Copy
First half
Predictable at times

Venkatesh thrills the audience as Rambabu and it is a tailor-made role for him. The actor shines throughout in each and every frame. Venkatesh carried the film on his shoulders. Meena has a decent role and the actress did her part well. Kruthika and Esther Anil have been good in their roles and they did their parts well. Sampath Raj and Nadiya have been powerful with their performances. Naresh and Vinay Varma shines in their attempts. All the other actors have been good.

Drushyam 2 starts off on a dull note and the first half of the film should have been better. The screenplay is decent and the thrills are executed well. The dialogues are good and courtroom episodes are shot well. The cinematography work is excellent and the music should has been better. The editing work is ok and the production values are grand. Jeethu Joseph plays safe and makes Drushyam 2 a faithful remake.

Drushyam 2 is a faithful remake and it makes a decent watch. The second half is gripping and interesting.