After SyeRaa promotional event, Prabhas called on Chiranjeevi at the venue to greet the team. Producer and actor Ram Charan and Chiranjeevi posed with Prabhas in a single frame. This awesome picture is now going viral in social media and left fans thrilled to the core. During one of promotions of Saaho, Prabhas revealed that Chiranjeevi called him after watching the trailer of Saaho and said that his appreciation stunned him.

Both SyeRaa and Saaho are pan-India films with huge star cast and made on a staggering budgets. These two tentpole films are expected to take Telugu cinema to next level. 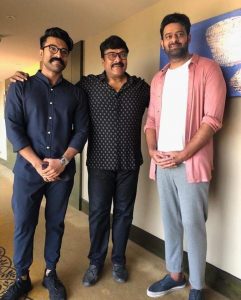