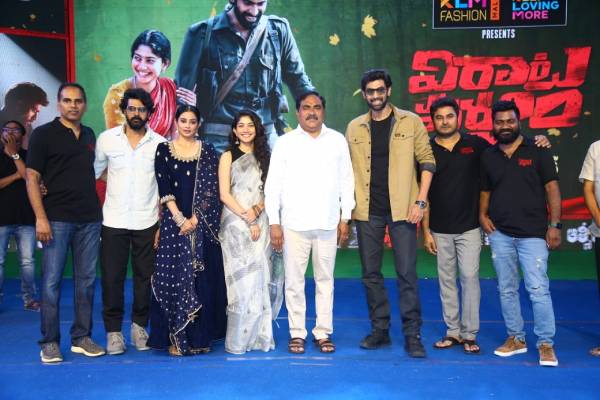 Rana Daggubati and Sai Pallavi’s Virata Parvam is all set for a grand release on June 17th. Venu Udugula directs the film produced by Sudhakar Cherukuri. A grand pre-release event of the film happened in Warangal and had superb attendance.

Speaking at the event, Rana Daggubati said, “People usually do films for claps, whistles, and fans but the reason why did Virata Parvam is for that one person who sits silently amid the crowd and thinks this story may be true. Venu came up with a real and wonderful story. We will bring more Telangana stories like this. We need all your love on 17th”.

Sai Pallavi is moved by the massive response she got from the crowd. “People of Warangal show me so much of love. I previously came here for Shyam Singha Roy. Art exists because of the people and people exist because of art. Virata Parvam is the story of this place. You will have to stand by this movie so that more honest stories like this come up. Venu hails from this area and he has dedicated this film to you. Please watch the film in theaters,” she said.

Director Venu Udugula has become emotional talking to the crowd. “Warangal is the land of revolution. A death in this area in 1992 moved me and it made me think. There is politics behind that death. I have always had a strong desire to bring it to the screen anyway. Adding a nice love story to it and bringing this film to you as an epic. I feel lucky to have Sai Pallavi play the role of the Vennela. Rana plays a character who can turn a lump of clay into a bomb. It is not my greatness that he is starring in this film that credit belongs to him. Virataparvam is a film especially for women to watch,” he emotionally said.