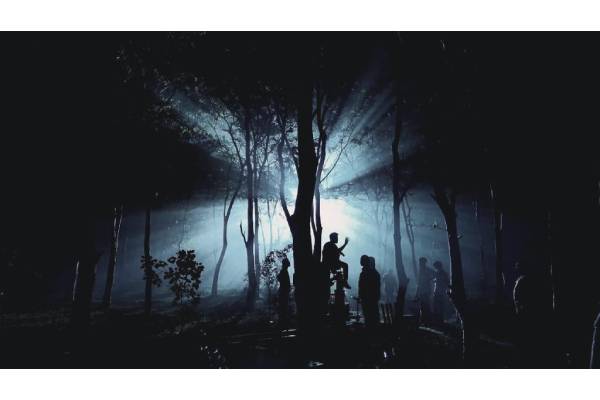 Supreme Star Sai Dharam Tej suffered injuries last year after he lost control of his bike. The actor took a major break from work and was in recovery mode. Recently he is back on sets and everyone on the sets welcomed him with warm wishes.

Within no time he completed around 30% of shooting for the film directed by Karthik Dandu tentatively titled as SDT 15. The makers completed this ,30% filming in just 25 days. Makers are planning to complete the shoot with the same pace.

Now the makers shared an intriguing behind the shoot pic to tease fans. The pic which looks like the crew is busy in setting a exciting frame in the deep shadows.

Sai Dharam Tej doing mystic thriller for the first time. This yet to be titled film is produced by Sukumar Writing and BVSN Prasad on Sri Venkateshwara Cine Chitra. The film is directed by Karthik Dandu. Shamdat Sainudeen will take care of the cinematography.