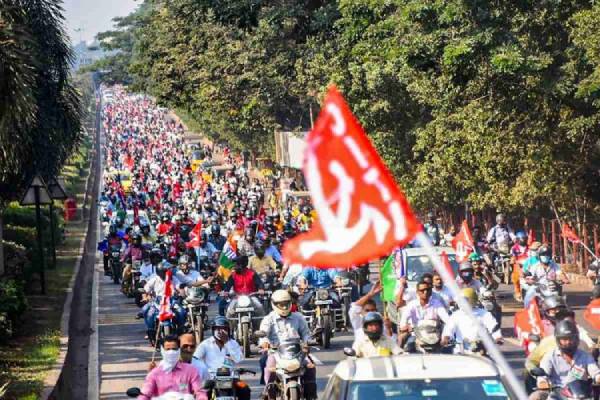 Agitations and protest movements for stalling central government’s decision to sell Visakhapatnam Steel Plant (VSP) have entered 150th on Saturday in the city.

These protests at the Greater Visakhapatnam Municipal Corporation (GVMC) have also reached 100 days.

On Saturday, several steel plant employees and hundreds of protesters took up a 30-km two-wheeler rally to send across a message to the central government to call off the privatization plan.

The rally is traversing through Kurmannapalem, Vadlamudi, Gajuwaka and other places.

“The central government has ignored the two letters written by the chief minister, including the state government’s requests and a resolution by the Assembly,” said a protester taking part in the rally.

Another agitator declared that the protests will not stop until the steel plant is continued in the public sector.

“Visakhapatnam is the birthplace of protest movements and we are ready to bend the necks of the central government,” he warned.

Admonishing the PM to take back his privatization plans, he reminded that many farmers sacrificed their land for the steel plant.

Hundreds of protesters rode their motorcycles as part of the protest rally in the port city.