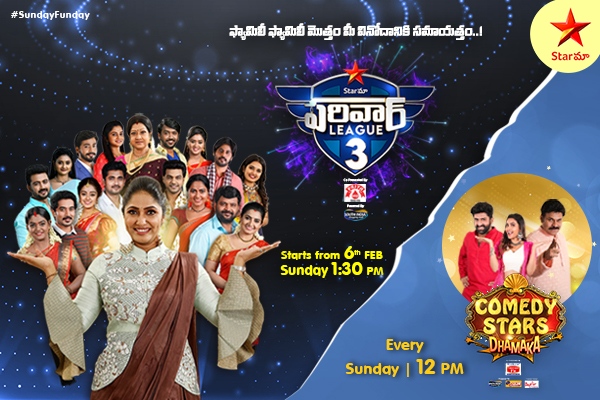 The most popular channel Star Maa is gearing up for its third season after two exuberant seasons of the “Star Maa Parivar League.”

The show will premiere on February 6th, and the fans will soon be able to watch their favorite actors every Sunday at 1:30 PM. With an entourage of 80 superstars starring in the channel Star Maa’s most popular serials, the third season promises to be even more spicy, sizzling, and star-studded.

Witness the glamour, glitz, and plenty of entertainment as the Tele stars take part in a range of entertaining tasks, games, and music, as well as giving the audience a Sunday to remember.

Catch all the best moments as the entertainment on Season three gets tripled with the most beautiful and talented Anchor Jhansi hosting it. Star Maa brings you the third Season of the Parivar League to give many more reasons to celebrate your Sundays.

Do not miss out on a fun time with your favorite stars shaping it into an unforgettable weekend.