Switch to: తెలుగు
Home Politics Why did DS Bite His Tongue in PC? 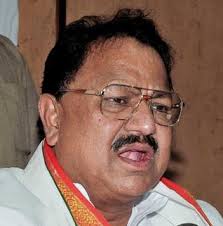 D Srinivas, the third PCC president to leave the Congress in the recent past,  developed cold feet to criticize the party for marginalizing him which ultimately forced him to embrace TRS. (The other PCC presidents who defected to other parties were K Kesava Rao and Botsa Satyanarayana.) In the press conference, Srinivas restricted his criticism to a single remark against Digvijay Singh, AICC general secretary, in-charge of Andhra Pradesh and Telangana, who he said a cheat. Everybody thought he would excoriate the party he was leaving.

Everybody knows D Srinivas was the principal beneficiary from Telangana when the Congress was in power at the centre and state. He was made minister and PCC president. He got his son Sanjay appointed Nizambad Mayor. There were complaints about his style of functioning. His distribution of B-Forms to party candidate from his residence instead of Gandhi Bhavan, party headquarters, had attracted criticism.

DS was the only senior Congress leader from Telangana who never uttered a single word supporting the Telangana, when in power. According to a senior leader, his marginalization in the party was not without reason. And many leaders were waiting to pounce upon him the moment he uttered a single word against the Congress party. The Congress had kept ready some of the candidates to reveal who they got the B-from from his son Sanjay.

Sensing the mood of his colleagues, he decided to confine his press conference just to reveal his intension to support chief minister KCR who is fighting with Andhra Pradesh for Telangana rights.

Consequently, the verbal fight has been averted. T-Congress leaders, N Uttam Kumar Reddy (PCC president), K Jana Reddy (Opposition leader), Bhatti Vikramarkha Mallu (PCC working president) and Md Ali Shabbir (former minister) softened their stand against their former colleague. They simply said people would not welcome his decision as he had enjoyed immense power and pelf. They dismissed the DS’ charge that he was humiliated in the party.  His decision was reeked of opportunism and he was so power hungry that he could not live even for a month without power and defected to TRS only to get some position, they said adding that his resignation won’t affect the any manner.