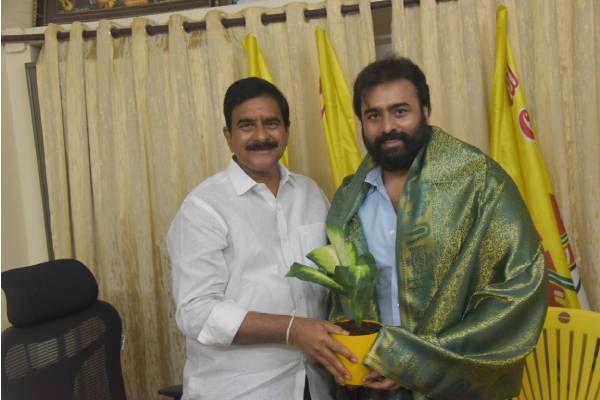 Does Chandrababu Naidu have an ace up his sleeve? Is he trying to bring to the front his nephew Nara Rohit into active politics? Nara Rohit may not be a star but has his own filmi charisma. More importantly, he has proved himself to be an effective communicator. So, highly placed sources say that Chandrababu is planning to use him for the TDP campaign.

It may be recalled that Rohit had campaigned for the TDP vigorously in the 2019 elections. He was mainly focused on Chittoor district. His punch dialogues and Chittoor dialect have endeared himself to the voters. His attacks on the YSRCP too were well-received. Though the TDP did badly by losing all but one seats in Chittoor district, the feedback from the ground revealed that Nara Rohit’s speeches were well-received.

Nara Rohit is the son of Chandrababu’s elder brother Rammurthy Naidu. He has done quite few films, where he has proved his abilities. At the same time, he has proved himself as a good communicator. So, Chandrababu is said to be thinking of using him for the party work. He feels that he would be an addition to the party’s pantheon of public speakers.

Quite interestingly, Rohit has recently called on Devinani Uma Maheswara Rao at the latter’s residence in Gollapudi. Devineni Uma was recently out on bail in connection with his comments on the mining in forest areas of Krishna district. He was accompanied by producers Atluri Narayana Rao and Tadikonda Saikrishna. Later, he told reporters that he had come to meet Uma only because he was a people’s leader. There was a great response to Nara Rohit’s visit to Gollapudi. Sources say TDP boss Chandrababu is planning to use Rohit more often in the party work. This has given rise to the grapevine that Rohit would play a more active role in the party.