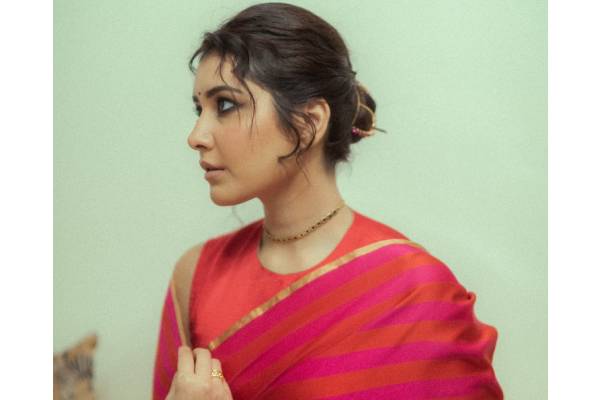 Actress Raashi Khanna, who plays the female lead in director Maruthi’s ‘Pakka Commercial’ which is scheduled to hit screens this Friday, on Wednesday expressed her heartfelt gratitude to fans for their unconditional support to her.

Taking to Instagram, the actress said, “The crazy schedules, the 24-hour shifts, the night shoots, the diets, the workouts, the multiple city hopping – every second feels worth it when I get to meet you and see your love and enthusiasm.

“Words always fall short for me to express my gratitude. Thank you for all your love and support through and through. My heart is full! p.s: ‘Pakka Commercial’ releases tomorrow. Hope to really entertain you through this one and bring a smile to your face. Lots of love your way!”

The trailer of the film, which the team released a few days ago, shows Gopichand playing an advocate who does not mind taking the side of law breakers for a handsome sum in the film.

Raashi Khanna joins as an assistant to Gopichand in the film while Sathyaraj, who plays Gopichand’s dad in the film, chooses to appear against his own son for the sake of justice in the film.

The film, that has been written and directed by Maruthi, is being presented by Allu Aravind and produced by Bunny Vass.

Cinematographer Karm Chawla has shot the film while Jakes Bejoy has scored the music of the film, which is scheduled to hit screens on July 1.