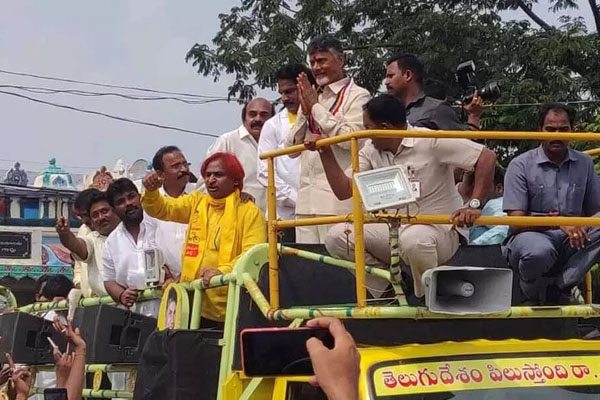 Former Chief Minister N Chandrababu Naidu asked whether the YCP Ministers are right now working from a cremation ground or a burial ground in Amaravati Capital City area. He expressed sadness, saying that the ruling party leaders are giving caste colour to the Capital City in order to malign its image. Naidu asserted that the TDP had never indulged in such cheap politics and their party had always worked for social justice to all sections of society.

Chandrababu began his state wide Praja Chaitanya Yatra from the Parchuru assembly segment today. He listed out the failures and atrocities of the YCP in the past nine months. The pensions are being cancelled to the old aged people and handicapped persons. This government is putting the farmers and women in jail when they are coming out to protest for justice. Naidu asked whether lathicharge on the peacefully protesting women was correct. He asserted that the TDP is always for justice each and every member of society.

Naidu asked why Jagan Reddy government is cancelling pensions on the pretext of high current bills and various other silly reasons. Students scholarships are also being cancelled.