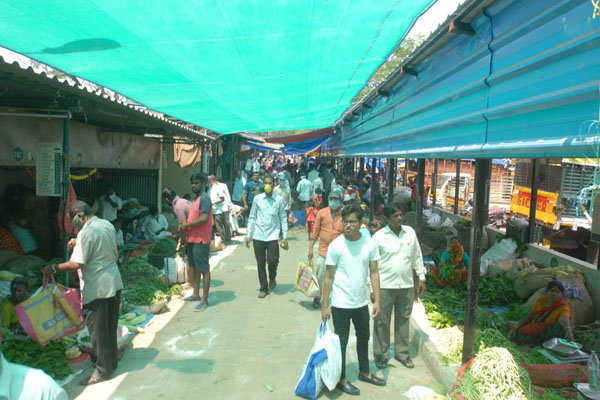 The state government on Sunday has further tightened the lockdown regulations by imposing fresh restrictions on people in Andhra Pradesh. As the number of corona positive cases rose to 20 in the state, the YSRCP government has decided to restrict buying of essentials till 11 am and this regulation will be strictly implemented in urban areas where a maximum number of corona positive cases were reported. Further, the state government announced that the social distancing norm will be strictly enforced.

The state government announced that the social distancing norm will be strictly enforced. But will it be practically possible for the government to enforce social distancing norm. With the time to buy essentials restricted to 11 am, people could turnout in large numbers at grocery stores and vegetable markets without paying heed to social distancing rules. One can expect a heavy rush of buyers in various parts of the state, especially in packed cities in Viskahapatnam, Vijayawada and Tirupati. It could be nearly impossible for people to maintain the required distance of at least one metre or 3.5 feet between each other to ensure social distancing to prevent spread of the contagion while buying essentials like milk, groceries and vegetables.

Further, such strict enforcement of time could lead to hoarding of commodities by traders resulting in artificial scarcity and price rise. As it is, there are reports of serpentine queues in front of supermarkets in Visakhapatnam, Vijayawada and Tirupati with customers eagerly waiting for their turn to purchase food items.

Prices of vegetables in most urban cities have tripled, which is turning out to be a double whammy for the daily wage earners engaged in informal sectors. Although the state government announced that it will take measures to safeguard migrant labourers and daily wage earners, it has so far not come out with a concrete plan to protect the most vulnerable section of the society. They have lost their employment due to the lockdown and are now being required to pay twice the amount for essentials.