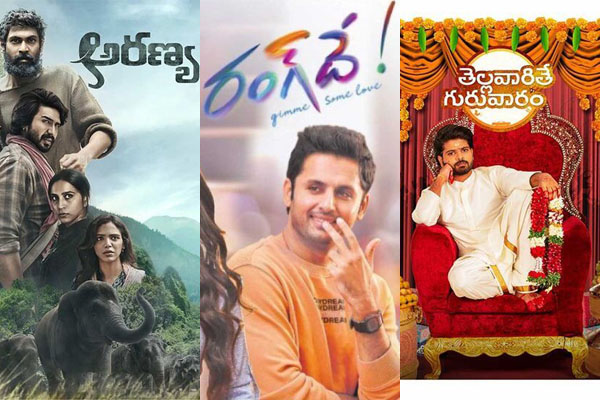 For a long time, the Telugu audience are waiting for March 26th as the most-awaited movies are releasing on that day! Another small-time film is also releasing this week, on March 27th, which is being promoted on social media for a few days. Let’s know the details of these 3 films – Rang De, Aranya, and Thellavarithe Guruvaram.

Rang De: Nithiin, Keerthy Suresh and the movie team have started promoting the film sometime back in unique ways. They have shared different videos which make people laugh and create curiosity in their minds to watch the film. Directed by Venky Atluri, Rang De is hitting the screens tomorrow, i.e., on 26 March 2021.

Aranya: Rana’s Aranya has started its work years back, but has taken time to complete. Rana and the team did a lot of research during the film’s shoot and the actor has also developed a special affection for elephants. This most-awaited film is also getting released tomorrow.

Thellavarithe Guruvaram: This is a small budget film which is releasing on 27 March 2021. Sri Simha Koduri and Chitra Shukla form the lead pair. The film’s trailer got a good response and people are showing interest to watch the film on screens.

Along with these three films, Hollywood film Godzilla Vs. Kong is getting released in Telugu tomorrow.

So, now tell us your pick!