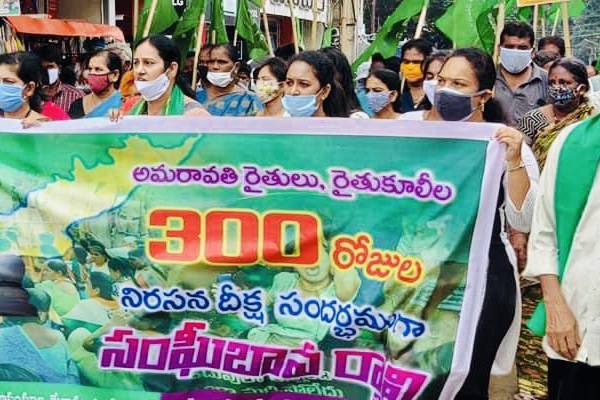 As the farmers’ agitation completed 300 days, TDP general secretary Nara Lokesh will be visiting villages in Amaravati on Monday.

Lokesh will be visiting Penumaka, Yerraballam, Krishnapalam, Tulluru and Dondapandi. Subsequently, Lokesh will interact with the farmers. His visit to the capital city comes in the wake of TDP president and former chief minister Chandrababu Naidu calling upon the party leaders and cadre all over the State to actively take part in the protests as part of 300 days of Amaravati agitation a grand success.

In line with the party’s firm stand on Amaravati as the capital city, Lokesh will be holding solidarity meetings with the farmers who gave 34,000 acres of land for the capital with trust in the YSRCP government. Lokesh had severely criticized Jagan’s move to create three capitals. He slammed Chief Minister Jagan Mohan Reddy stating that he had turned Amaravati into a burial ground. He had also pointed out that at least 82 farmers ended their lives for the cause of Amaravati as the capital city.

Capital buildings were already constructed with a cost of Rs 10,000 crore during the previous TDP regime. The Amaravati Parirakshana Samithi has organized several protest programmes and massive rallies on Sunday to mark the completion of 300 days of agitation. Protest demonstrations will be held across mandal revenue offices and assembly constituencies on Monday.