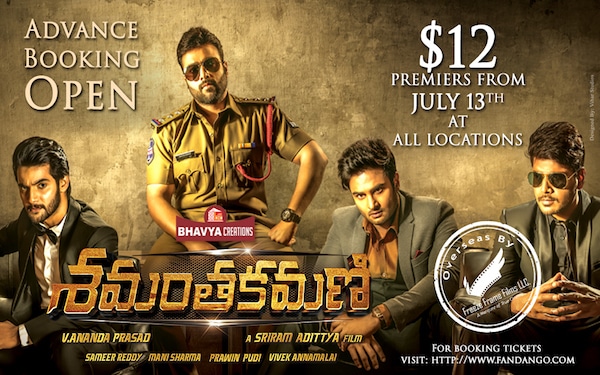 In the increasing world of the egos, fans and markets, multi starrer became a strict no-no in Telugu cinema. An occasional film or a guest appearance sure did happen. But, four hero’s in one film. That too
from Gen-X is unimaginable. But here it is. That too with a maverick lone crusader Nara Rohit. Narcissist performer Sandeep Kishan. Self-obsessed Sudheer Babu and boy trying to join the grown-ups club Aadi coming together. They might be friends, but each one will act only if they have enough to chew from the film. I am sure there is. That is what keeps me waiting too.

A black comedy in the heist backdrop with colorful characters is a thing that we hardly see in regular Telugu commercial cinema space. Neither the genre nor theme sound “routine” in any sense of the term. When variety is the spice of life and adding spice is what cinema does to our mundane lives. Here is the film. That can make it not just spicy but colorful too.

Mani Sharma seem to have woke-up from his long slumber and touched the keyboard with his magic wand. The sounding is new. And cinematography by Sameer Reddy is promising heavy duty lightening per frame. So the music and visual magic are yelling me to check-in to theater and update the status on Facebook.

This is just his second film. But the promise he has shown through his first and flare that he is exhibiting in the second makes me bet on him. He is sure a winning horse. Sriram Adittya is his name. But he
makes Telugu cinema feel, Hollywoods stylized makes Quentin Tarantino, Guy Ritchie and Edger Wright all rolled in to one just arrived. So, just for him I am ready to sing “O Captain! My Captain!!”

Rajendra Prasad is a name that made couple of generations laugh. He was lost in-between, and found his way back with new ammunition for the new generation. New- Gen filmmakers are also using his potential to the maximum. The trailer seem evident of that fact. Hence RP alone can be one major reason to watch this film.