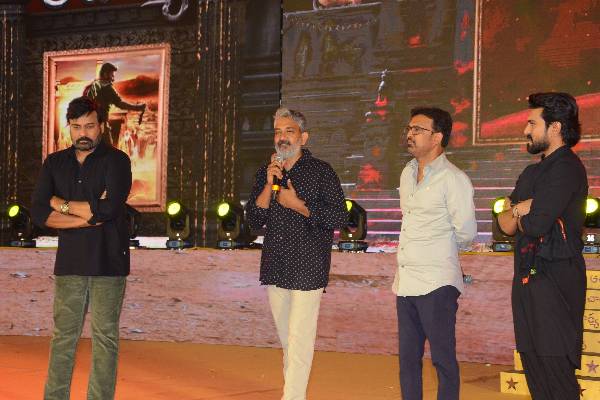 Top director SS Rajamouli attended the pre-release event of Acharya as a Chief Guest. He heaped praise on Chiranjeevi and Ram Charan. He said that Acharya would be a double blockbuster. “People ask him how could I stay humble. I learned to be humble from Megastar who reached great heights. As a fan I will vote for Chiranjeevi garu but I would love to watch my hero Ram Charan on screen. Koratala Siva sounds simple but he is a man who observes a lot. He is one of the best mass directors of this time” told Rajamouli.

He also heaped praise on Ram Charan saying that he is a self-made man. “I felt that Charan walked in the footsteps of Chiranjeevi garu. But Charan is a self-made man. Charan locked his own scripts and finalized films on his own” told Charan. Directed by Koratala Siva, Acharya has Chiranjeevi and Ram Charan in the lead roles. The film produced by Matinee Entertainments is hitting the screens on April 29th all over.