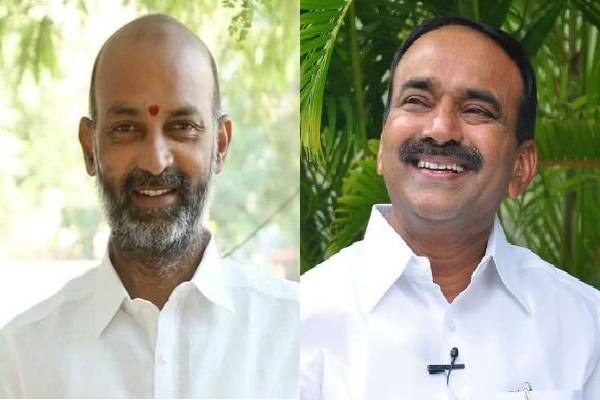 All is not well between Huzurabad MLA Eatala Rajender and BJP state chief Bandi Sanjay. Bandi Sanjay is said to be unresponsive to Eatala. Insiders say that Eatala is miffed at this, but at this stage, he is not considering any drastic decisions. Unlike Sanjay, Eatala has no experience of working in a national party and has no ready access in the higher echelons of the party.

Sources close to Eatala say that Bandi Sanjay did not show any interest in holding a victory meet in Huzurabad constituency. There indeed was a rally on the day Eatala was declared the winner. But, no major meeting was planned so far. Sources say that Eatala did broach the subject, but Sanjay did not respond favourably.

However, being a seasoned politician, Eatala is making his moves in earnest. He has recently met Eenadu’s Ramoji Rao and held parleys for over an hour. Similarly, he met the Art of Living Guru Sri Sri Ravishankar at Hyderabad and discussed both politics and spirituality with him. All these visits are said to be preparatory for a longer stint in the BJP. Sources say that despite the challenges, Eatala wants to stick to the BJP. He is said to have met BJP leaders like Perala Sekhar Rao and several others to understand the party’s functional mechanisms.

But one major problem for him is that none of the seniors such as Kishan Reddy, Chintala Ramachandra Reddy, Dr Laxman and even party president Bandi Sanjay are not exactly cooperating with him. He is also upset that some of the party leaders are spreading stories that he would soon join the Congress.