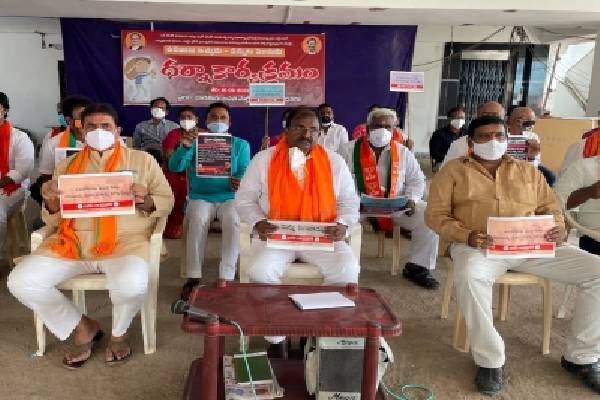 Andhra Pradesh Bharatiya Janata Party (BJP) on Wednesday held statewide protests against the ‘tax hike’ by the state government and alleged that it was doing so to fund the freebies.

Senior BJP leader and Rajya Sabha member G.V.L. Narasimha Rao alleged that the Andhra government was doling out freebies on the one hand and raising taxes on the other.

“Doling out freebies on the one hand and raising taxes on the other hand, Yuvajana Sramika Rythu Congress Party (YSRCP) government is breaking the back of the common man. BJP has organised a statewide protest to oppose these anti-public policies,” said Rao.

As part of the protest, the BJP leaders and cadres protested at municipal corporations, municipalities and nagar panchayat offices across the southern state.

Party state president Somu Veerraju participated in the protest programme at Rajamahendravaram, where he demanded that the Y.S. Jagan Mohan Reddy led the government to rescind the new tax policies. “Doling out freebies for vote bank and raising taxes for currency,” alleged Veerraju.

“It is incorrect on the part of BJP leaders to be intolerable towards free schemes for the poor. There would be no problem if they protested tax hike but why are BJP leaders crying when AP government is giving free schemes to the poor,” questioned Subhramanyam.

He also questioned if the free schemes being doled out by the BJP are also wrong?

According to the Navataram Party president, it is the right of poor people to receive free schemes from the government and quizzed the BJP leaders if they do not know this simple fact?

Observing that protests against free schemes question the very survival of the BJP party, he termed this endeavour as a publicity stunt.

According to Subhramanyam, the BJP has devised this programme to show that the party exits post Tirupati Parliamentary bypoll drubbing and noted that the protest programme will only bring disgrace to the party leaders.

Despite several efforts, BJP and Janasena failed to restrain minnow Navataram Party from contesting the bypoll under that symbol as it ran the risk of confusing voters.