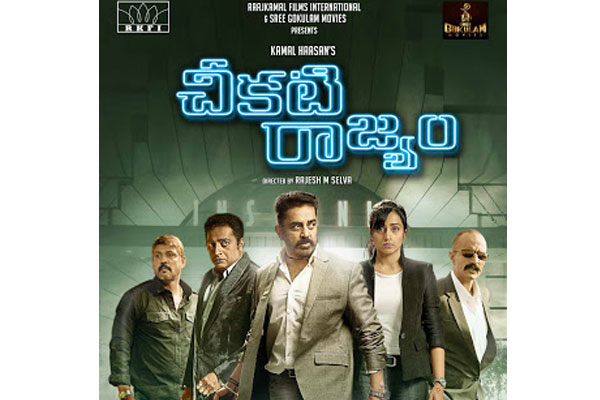 Numerous big budget films are gearing up for release during Dusheera and Diwali, which fall in October and November respectively. Films that couldn’t make it to screens in October are fast finishing their shooting and post production work to entertain the audience during Diwali. One of the highly anticipated films this season is Cheekati Rajyam, which is also in race for November release.

It is a Telugu-Tamil bilingual thriller starring Universal actor Kamal Haasan and gorgeous actress Trisha Krishnan in the lead roles. The film is an official remake of the French movie ‘ Sleepless night ‘ in which the entire story unravels during a single night. Kamal Haasan is playing a cop in the film.

As reported earlier, the film is confirmed to hit the screens for Diwali. The makers are looking for a possible date in November first week to release the film. The trailers have been getting a thumping response. The post production of the film is going on at a rapid rate.

Prakash Raj, Madhu Shalini , Sampath Raj and few others are playing important roles in the film. Rajesh M Selva is the director and Raaj Kamal Films has produced the film. Ghibran is the music composer.