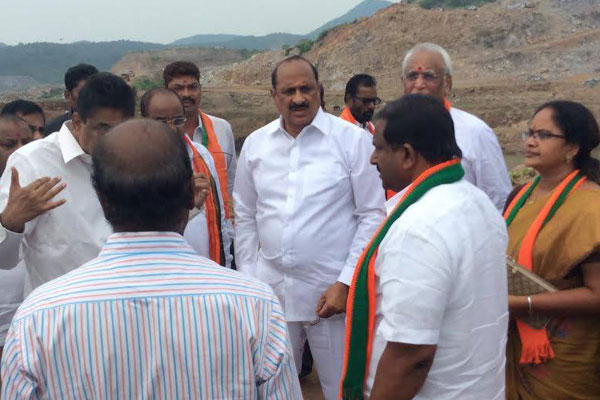 Is centre thinking that if funds are released in one go to the project there is every danger of them being diverted to chief minister Chandrababu Naidu’s ambitious projects like capital construction, Pattiseema and ports etc? While Naidu wants release of money in a liberal way the NDA government wants do it as per the work done. Centre is following “no work, no pay” principle. This applies to other assurances also: ” No Land No Institutions”.

With pressure from all sides mounting on Naidu on the commencement of work on Polavaram, Naidu is planning to make PM Modi to perform the foundation laying ceremony on October 22, when PM will be in the state to lay foundation stone for capital Amaravati. After the so called completion of the Pattiseema, YSR Congress, Congress , LoK Satta and the Left have started demanding that Polavaram also be completed on war footing. The foundation stone laying ceremony is exactly meant to show that TDP government has not abandoned the Polavaram project.

Chief minister Naidu wants the reimbursement of Rs 5000 crore spent on the project by previous government as per the agreement. Centre is not ready. Because, any release would get diverted to Naidu’s pet schemes and projects. Once foundation is laid, the state has to release a minimum of Rs 5,000 crore to Rs 6000 crore and get it reimbursed later. Which is practically impossible , after Pattiseema. In a couple of months, Naidu may launch attack on Opposition parties that he was not able to take up Polavaram because of non-release of adequate funds from the centre. BJP seems to have anticipated Naidu’s tactics and asked it’s state leaders to put pressure on Naidu to start work on Polavaram and then ask for reimbursement.

Now, after 15 months into the government in which it is also a partner, BJP in Andhra Pradesh suddenly discovered to its surprise that the Polavaram project was not progressing commensurate with the importance attached to it. A team of leaders went to the project to verify the physical progress made on the project. It came back disappointed. BJP leadership want’s the works on Polavaram should also be executed with same immediacy with which the state government completed the Pattiseema project, within the stipulated one year.

The party is all praise for the Pattiseema, but expressed concern at the tardy progress of Polavaram. It found no work on the project site. “Nothing has been done so far and the state government says the Centre has to reimburse Rs.1,900 cr which it says it has so far spent on the project. When we visited the Polavaram project site, I did not find any evidence that some construction work had taken place there. I would like to know on what basis the state government is seeking reimbursement of the funds from the Centre,” Haribabu let the cat out of bag.

It is interesting to know that party fielded Haribabu, who is considered pro-Naidu in BJP’ to question Naidu’s commitment on the Polavarm. He raised pertinent question as to why the Pattiseema project speed was missing in Polavaram. “I was in fact surprised at the speed with which the engineers of the Irrigation Department worked day in and day out to complete Pattiseema in a record time. Engineers working to a deadline is something that has not happened in the past and I have all the appreciation for the commitment they demonstrated,” Haribabu remarked, He said centre was not able to cancel the contract given by the earlier government and the SPV was proposed for Polavaram construction would not go ahead.

Haribabu had a suggestion to offer to the state that if the contractor who had been given contract was not able to carry the works, it was incumbent upon the state government to cancel the contract and go in for a fresh one. The BJP president had an answer to other criticism leveled against the centre by all sides with regard to the delay. Here also Haribabu ensured to throw the ball in the court of TDP.

“it was not fair for anyone to criticize the Centre for the delay in sanctioning institutions that had been promised in the AP Reorganisation Act. Centre can establish an institution, one when the state identifies the land. Why the foundation stone has not been laid for All India Institute of Medical Sciences (AIIMS)? Because the land had not been identified,” he added In fact, just two days back, union agriculture minister Radha Mohan Singh also told this to none other than the CM itself, when the latter met Singh in Delhi two days ago.

When Naidu reminded the union minister of centre’s assurance to set up an Agriculture university and Aqua University on September 23, the minister replied ,” allot the land we will immediately set up the institutes.” Haribabu,however, hastened to add that just because the BJP was unhappy with the Polavaram, it should not be construed that the party wants to distance itself from the TDP.