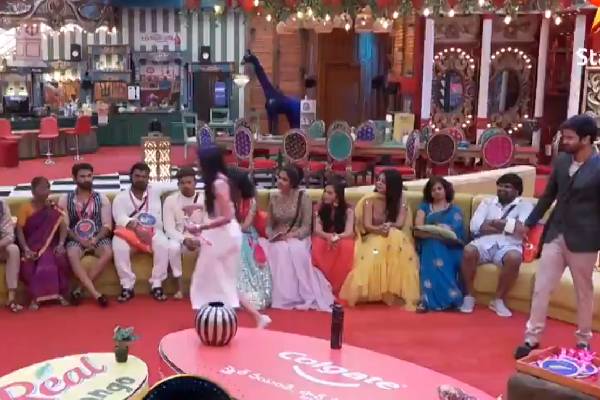 The episode started with Nagarjuna saying, ‘we will come to know who Kattappa is’. Later, men were seen swimming in the pool, and Monal, etc were talking and commenting about them. Meanwhile, it rained and all the housemates started dancing.

Gangavva shared her flashback and the hardships she faced in life. She was also seen saying whenever she wants to quit, she will inform Nagarjuna one week before and exit the house.

Amma Rajasekhar is slowly establishing himself as an entertainer. He tried to flirt with Divi yesterday and it backfired. Anchor Ariyana is trying to flirt with Amma Rajasekhar but he is retorting to her in a comedy way. He played a prank on Karate Kalyani today. He asked her to sing a song and as planned all the housemates started dispersing immediately after she started singing.

Abhijeet was seen showing some interest in Monal. He is one of the most eligible bachelors in the house.

Surya Kiran already established himself as an impatient person. He is behaving like a director who tries to correct others. Today also while selecting items based on a luxury budget, there was chaos and Surya Kiran got impatient by seeing the unplanned approach of housemates in selecting items.

Nagarjuna’s feedback on characterizations of housemates:

Abhijeet is the first housemate to get saved this season. Later Jordar Sujatha, got saved and she was over excited to know this. Gangavva also got saved this week. So, Surya Kiran, Divi, Mehboob, and Akhil are still in the danger zone.