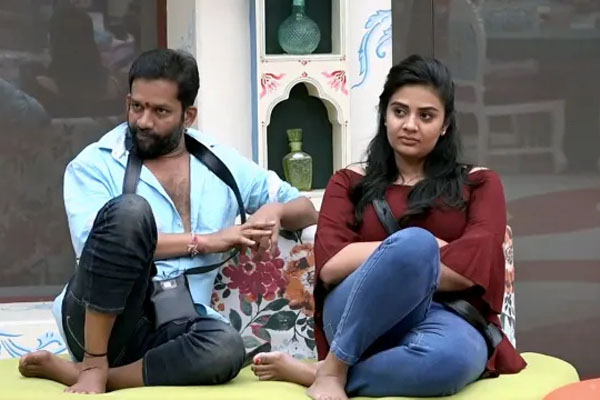 Monday is nomination day in Bigg boss. Usually, nominations re decided on housemates’ opinions or physical tasks. However, today nominations are based on the random drawing of slips with numbers. That itself surprised the audience, but Bigg boss gave a further twist in the climax of the episode.

Bigg boss gave a bowl with slips having numbers 1 to 7 to the housemates and they drew the slips. Baba got number 1, Rahul got number 2, Varun got number 3, Ali got to number 4, Shiv Jyothi got 5, Vithika got 6 and Sreemukhi got 7. Bigg boss told, whoever got last 4 numbers i.e. 4, 5, 6 and 7 – they are nominated for this week eviction. But there is a catch. Housemates can convince other housemates how they are better than that person and interchange their positions. They can repeat the process until they finally arrive at their positions.

Intense arguments and interchanging of positions:

To save herself, Shiva Jyothy sank the entire ship:

As per the process, housemates need to convince others and get their position. But Shiva Jyothy played a foul game by standing in the same position as Vithika. Shiva Jyothy as well as Vithika, both know that if more than one person stands at the same place both will get nominated. In the previous season, Deepthi Nallamothu and Kaushal, both got nominated because of this reason. Both Vithika and Varun got tensed and argued with her, as they predicted the same outcome, but she adamantly stood at the position of Vithika along with her. She proved that, if the situation arises for her to sink, she doesn’t mind sinking everyone along with her.

Bigg boss finally announced that, as housemates couldn’t decide positions, entire house will be nominated this week. We will have to wait and see who will get evicted this week. As of now, it looks like – Ali, Shiva Jyothi, and Vithika are the bottom 3, in the same order.