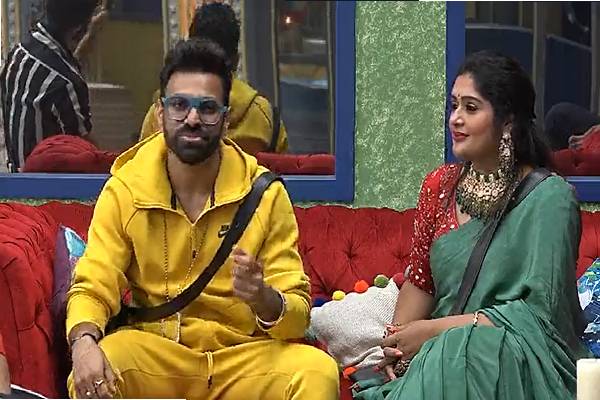 Bigg Boss season 5 is going on good. After the heated up arguments during the nominations, today or was time for some fun.

Priya, during nominations, slips her tongue and says Lahari is spending most of the time with men. Lahari seems to have come to the house fully prepared and trying her level best to get maximum mileage out of the issue. She is intentionally dragging the issue putting Priya in embarrassing position. Ravi seems to have flipped his stand with Priya. Priya later apologized to Lahari and Ravi.

Today Bigg Boss gave a task to housemates to play a skit. Sriram is US returned guy looking for a suitable bride. Lahari is the Hyderabad girl, prospective bride for him. Priya is Sriram mother, Anne is Lahari’s mother. Shanmukh is marriage broker. Lobo and Sweta are his assistants Ravi is Lahari’s uncle.

Sunny and Priyanka played as lovers. Hamida is Sriram’s ex girlfriend. Manas is one side lover of Lahari. Sunny tried to show his funny side by cracking side spontaneous jokes during the skit.

Entire episode was filled with this skit that looked just average. In the previous seasons contestants like Navdeep, Dhanaraj, Sreemukhi and Avinash made the skits entertaining but this skit was just average.