It is a known fact that Andhra Pradesh opposition leader YS Jagan Mohan Reddy has been stabbed on shoulder by a youngster identified as Srinivas in the airport lounge earlier today in Vishakapatnam.

After receiving immediate first aid in Vizag, Jagan reached Hyderabad and was taken to hospital for treatment. Doctors said that it was a 3-4 cm deep serious injury and needs to be stitched.

But, Telugu360 got hold of the doctor’s report in Vizag where Jagan was treated first. As per the report, there is no serious danger to Jagan’s left shoulder as reported by Hyderabad doctors. The Vizag doctor’s report mentions that the wound has been cleaned with spirit and was tightly dressed with gauge roll to stop bleeding. It is just a 0.5 cm depth and requires no stitches. Doctors have advised antibiotics and pain killers. But, it looks like Jagan’s team tried to exaggerate the seriousness of the injury after reaching Hyderabad. 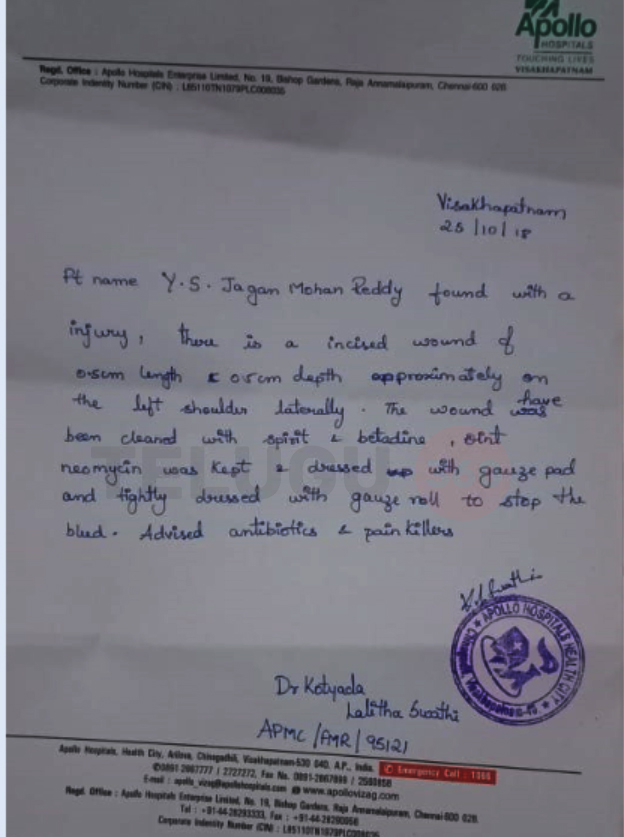