Young Tiger NTR is busy promoting his next film Jai Lava Kusa which has been announced for Thursday release. The acto has be interacting with the media and he revealed many interesting facts. During his recent interaction wit a leading news channel, the actor admitted that Allu Arjun is his favourite dancer and he loves his dance moves. This is something unusual and doesn’t happen with Tollywood actors.

Tarak who is a terrific actor surprised everyone with his statements. The actor for the first time in his career is playing a triple role in Jai Lava Kusa. During his recent interview he even revealed that all films that will hit the screens during Dasara should do well and he said that there is healthy competition in Tollywood. Tarak sounded very confident about Jai Lava Kusa which has been directed by Bobby and produced by Nandamuri Kalyanram. 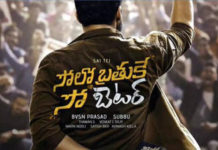