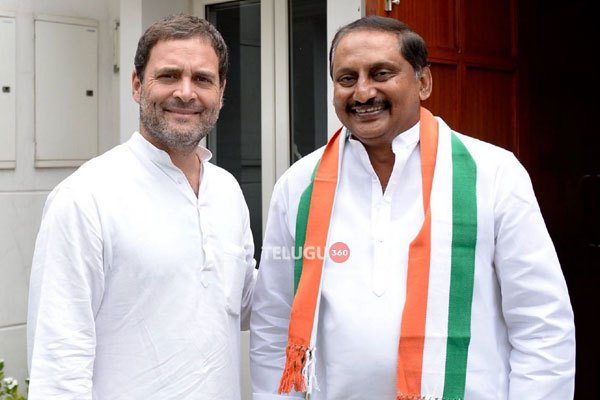 The Ghar Vapsi of former chief minister of Andhra Pradesh and the protagonist of united state has certainly enthused the leaders and cadres of beleaguered Congress. The party vanquished by the what is believed to be the arbitrary bifurcation of the state by the Congress led UPA government in 2014 see in this development a hope for revival. The party saw an exodus of leaders and cadres after its worst ever debacle at the hustings.

But, what would be the real political impact of Kiran’s home coming on the political prospects of the party in the run-up to the 2019 elections is almost a foregone conclusion.

The congress has the credibility when it promises special status to Andhra Pradesh for more than one reason. The BJP led NDA has blatantly belied the expectations of people of the state when it denied the promised special status. The half hearted implementation of the provisions of the Andhra Pradesh state bifurcation act has further infuriated the people who see special status as the main aspect that can rebuild the state. It was Manmohan Singh led congress government that promised special status. Rahul Gandhi has declared his unequivocal support to the demand for special status and participated personally in the agitations for such a status. The Congress has even declared that Rahul Gandhi would sign on the special status file the moment he assumes the office of Prime Minister if the Congress is voted to power.

The return of Kiran Kumar Reddy at a time when the party is only witnessing desertions is certainly a positive factor. But, this alone would not gather the much required momentum to revive the party that has been almost decimated in the state. Yet, the party still has few leaders who have the strength at the grassroots level and polled significant votes even during the adversity of 2014 . The congress hopes to multiply such leaders encashing on the return of Kiran Kumar Reddy .

But, the party’s voting tally has plunged to such a low level in 2014 and any significant improvement could mean much more voting but not a significant number of seats.

However, the congress showing signs of revival would like to use this to bargain allies especially the ruling TDP . The TDP has also shown such gestures. The presence of Chandrababu Naidu in the Bengaluru meet along the Congress top leadership is an indication that the TDP is not so averse to doing business with Congress. But, will it have an alliance or understanding with congress before 2019 polls is again a million dollar question.

Kiran Kumar Reddy who headed the resistance against bifurcation could get political stature. But he does not enjoy any mass support evident from the poor performance of his party Jai Samaikyandhra Party in the 2014 elections.

The Congress has to build a further political narrative around special status. It should attract more leaders to return to Congress and finally it should rope in allies . This three pronged strategy would only help the party’s revival .

Prof.K. Nageshwar is India’s noted political analyst. He is a former member of the Telangana Legislative Council and professor in the Department of Communication & Journalism, Osmania University, Hyderabad, India