Switch to: తెలుగు
Home General Capsized Andhra boat had 77 on board, 16 still missing 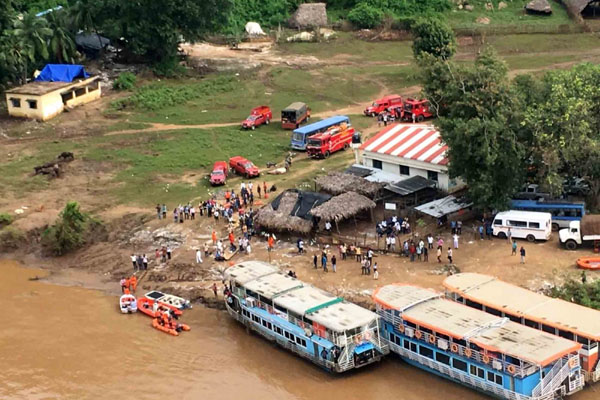 The private tourist boat which capsized in the Godavari river in Andhra Pradesh’s East Godavari district on September 15 was carrying 77 people, and not 73 as believed earlier, officials said on Friday.

State Agriculture Minister K.A Kannababu said 16 people are still missing. He told reporters here that the statement by the survivors revealed that there were 77 people, including the crew, on the boat, which capsized in the swollen river at Kuchuluru village near Devipatnam while on its way to the picturesque Papikonda hills.

Kannababu said while 26 persons were rescued by villagers immediately after the accident, bodies of 35 persons were recovered over the last five days.

Rescue workers on Saturday pulled out body of one woman from near the accident site. She was identified as Aruna, a resident of Visakhapatnam.

He said nine persons from Andhra Pradesh and seven from Telangana are missing.

Meanwhile, the rescue workers on Saturday called off search operations due to high velocity of water.

Personnel from the disaster management team of Uttarakhand said search operations would resume once they get the nod from their experts.

Though the boat was traced at a depth of 70-80 meters, no progress could be made in the efforts to pull it out. Officials say that bringing the boat out is a difficult task.

In another related development, police arrested the boat owner for negligence. Police produced K. Venkatramna, owner of Royal Vasista, before the media.

Police said the boat was registered in the name of two women, Prabhavati and Achyutamani, and they too were taken in custody.

They face charges of criminal negligence for operating the boat despite the river being in spate.