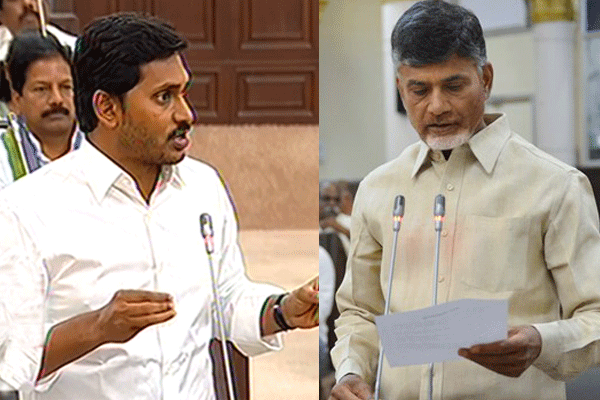 The cash-for-vote scam rocked the AP Assembly on fifth day, the last day of the ongoing monsoon session, which led to the acrimonious scenes in the well and finally to the two adjournments.
In Andhra Pradesh Assembly everything boils down to Jagan vs Chandrabu Naidu. Today, the vote-for-scam also has got finally reduced to Naidu versus Jagan fight relegating the regular business to the background.

YSR Congress insisted on taking up the infamous cash-for -vote scam as adjournment motion for a debate in the House as the chief minister’s name figured 22 times in the charge-sheet file by Telangana ACB, which is investigating the case. Ruling party members stoutly opposed any debate on the subject as it was related to another state. Speaker Kodela Sivaprasadarao disallowed the notic while advising the opposition benches that it was sub judice.

But, opposition members, demanding a debate on the subject, rushed into the well raising slogans.
The YSRCP MLAs Roja, Kotamreddy Sridhar Reddy and Chevireddy Bhaskar Reddy attacked the TDP for its efforts to shield the chief minister who was involved in the cash-for-vote scam. “The ruling party is scared of debating the issue. Because Naidu is personally involved in the scam. He is taking commissions in the state and using the money to buy MLAs in other state,” Roja attacked. The treasury benched attempted to repel the attack by alleging that Jagan had colluded with TRS in Telangana.

The TDP deployed chief whip Kalva Srinivasulu, welfare minister Ravela Kishore Babu, senior member Dhulipalla Narendra and sports minister Achhannaidu, who charged that YSRC was in league with TRS to kill the TDP in Telangana. “Jagan was embodiment of corruption. He is the most corrupt politician in the country. Every Friday he attend the court to face trial in more than a dozen cases. He has no moral right to talk on Chandrababu Naidu,” they said.

Reacting to the allegation Jagan said it was Chandrababu Naidu who hobnobbed with KCR . Showing a picture of KCR and Naidu campaigning jointly in 2009 elections, Jagan said,” the TDP has a lot to answer on the cash -for-votes scam.,” he also hurled a challenge that he would resign in minutes from the Assembly if the ruling TDP offered proof that he had spoken to or written a letter to Telangana CM KCR. He asked Naidu to tell whether the voice recorded in telephone conversion was his or not.