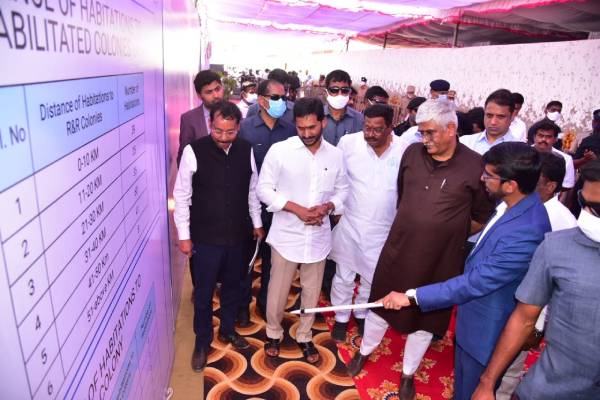 Union Jal Shakti minister Gajendra Singh Shekhawat on Friday inspected Polavaram project works and assured Andhra Pradesh that the Centre is firm in its commitment to complete the scheme by bearing its entire cost.

He, along with Chief Minister Y. S. Jagan Mohan Reddy, visited Polavaram site and inspected the works on various components of the project, which has been declared as a national project by the Centre.

Addressing meetings in resettlement colonies in East Godavari and West Godavari districts, he said they were taking all steps to ensure that the first phase of the project is completed in a span of one year.

Shekhawat assured people that the Narendra Modi government will complete the project by bearing the entire cost as promised in Andhra Pradesh Reorganisation Act.

He assured the state government that the Centre would provide whatever assistance the state required will stand by the government unless the project completed in all manners.

He also assured displaced people that their rehabilitation and resettlement is the responsibility of both the central and state governments.

He recalled that the project was first proposed in the 1970s, and the work progressed when Y. S. Rajasekhara Reddy was the chief minister of combined Andhra Pradesh but unfortunately even after 40-50 years the project could not be completed.

The central minister said the chief minister during his recent meeting with the Prime Minister discussed everything about Polavaram for its early completion.

He said that justice will be done to the families displaced by the project by accommodating them in resettlement colonies.

They interacted with the relocated families and directed the R&R officials to pay more attention to rehabilitation works. Addressing the gathering, the chief minister said that Polavaram is a lifeline for Andhra Pradesh. He said with the completion of the project the state would become more fertile and prosperous.

Jagan Mohan Reddy said that the state government is committed to the promise made to the displaced families. The state government will provide Rs 3 lakh to each family in addition to Rs 6.8 lakh being provided by the Centre. He assured people that this promise will be fulfilled at the earliest.

He also promised to provide Rs 3.5 lakh to those families who initially gave their lands for Rs 1.5 lakh in 2006 during Y S Rajashekar Reddy regime. Besides these, he stated that livelihood training and employment programmes will also be taken up in the R&R colonies to improve employment opportunities.

Shekhawat expressed satisfaction over development of resettlement colonies and advised officials to focus more on quality. He called for providing livelihood opportunities and training in R&R colonies.

He said that the authorities have to be considerate in providing facilities to the displaced families until they get settled in the new place.

Speaking at Taduvai R&R colony in West Godavari district, Jagan Mohan Reddy said that the construction of 3,905 houses in the colony is going on full swing and soon every displaced family that contributed towards Polavaram project will receive a house with all basic infrastructure facilities. He said that livelihood training programmes will also be conducted in the R&R colonies taking support from the Centre.

Shekhawat took stock of the progress of the project and funds released with the Polavaram Project Authority (PPA) comprising officials from the Jal Shakti ministry and state irrigation department.

The state government reportedly urged the union minister to give final clearance for the Revised Cost Estimates (RCE) to the tune of Rs 47,725 crore. The Centre kept the RCE in pending for three years resulting in delay in completion of the works.

The state government is keen to complete the project by June 2023 and has been urging the Centre to keep releasing the required funds.