Switch to: తెలుగు
Home Politics Chandrababu confident of getting past glory to TDP 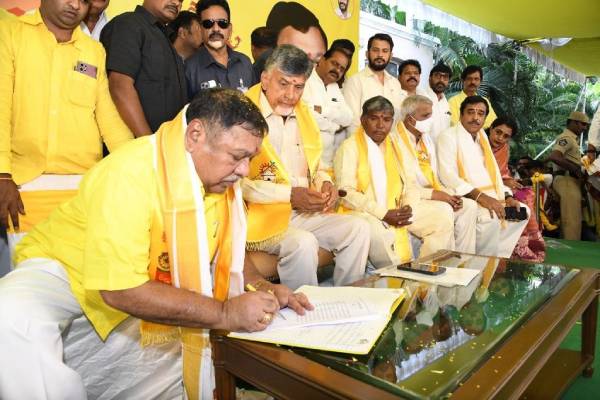 TDP president and former chief minister, Nara Chandrababu Naidu, on Thursday expressed confidence of getting former glory to the party in both the Telugu States.

Chandrababu Naidu said that the Backward Classes (BCs) are the backbone of the TDP and the presidents of both the Telugu States units belonging to the community is evident enough of it. The TDP president administered oath to the Telangana State unit president, Kasani Gnaneswar, at NTR Trust Bhavan in Hyderabad.

Speaking on the occasion, Chandrababu Naidu expressed confidence that the party will certainly gain the past glory under Gnaneswar. Recalling that the TDP took birth in Telangana under the leadership of late N T Rama Rao, the TDP chief appealed to the people of Telangana to bless the party.

Stating that it was the TDP and the late NTR, who gave a totally different definition for politics, he asserted that the primary goal of the TDP is welfare of the poor and to take society forward. The Rs 2 a kg rice scheme launched by late NTR in the combined Andhra Pradesh, laid the foundation for food security across the country, he added.

The TDP always struggled for the uplift of the downtrodden sections of society but not to get positions, Chandrababu Naidu said adding that it was the TDP that created wealth and distributed it among the poor.

The TDP provided reservations for the BCs and women in local bodies thus making them partners in the development, the former chief minister said. In fact, it is the TDP that laid the foundation for various drinking water and irrigation projects in Telangana, which was earlier reeling under acute water problems, he added.

Those who made fun of the Vision-2020 then can witness the growth of Cyberabad now, he said and assured the party cadre in both Telangana and Andhra Pradesh that he will stand by them.