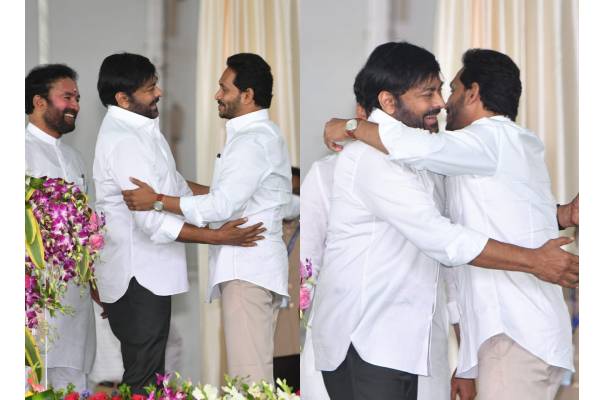 Actor and former Union Minister K Chiranjeevi sprung a surprise to everyone at Bhimavaram with his appearance as Prime Minister Narendra Modi launched the year-long celebrations of 125th birth anniversary of revolutionary freedom fighter Alluri Sitarama Raju on Monday.

Chiranjeevi, who was the former Union Minister for Culture and Tourism, reached the venue a few minutes before the arrival of the Prime Minister. His successor and Minister G Kishan Reddy welcomed the former minister on the dais with a handshake and hug.

On his arrival, Chief Minister Y S Jagan Mohan Reddy too greeted Chiranjeevi on the dais with a smile and warm hug. They exchanged pleasantries as the crowd greeted them with claps and whistles.

However, it is not known what the Prime Minister shared with Chiranjeevi, but the atmosphere was pleasant and a welcoming development for the crowd going by the way they responded.