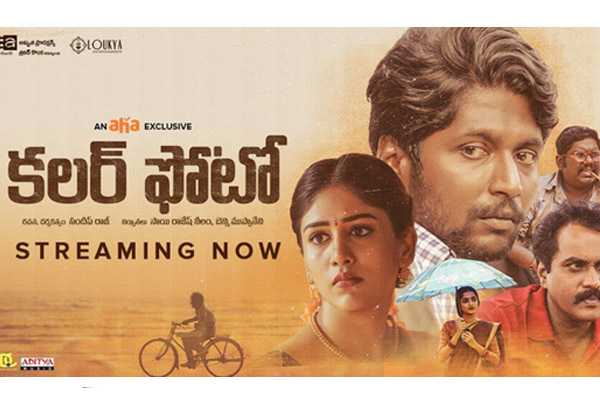 Telugu digital platform Aha acquired the digital streaming rights of a small film Colour Photo which caught everyone’s attention in the recent times because of the promotional stuff. Comedian Suhas is making his debut as the lead actor and Chandini Chowdary is the heroine. Sandeep Raj directed this romantic drama that happens in a village in 1997. Kaala Bhairava composed the music and the film is streaming now on Aha.

Colour Photo is the story of an aspiring youngster Jayakrishna (Suhas) who comes from a small village. This dark-skinned guy is quite hesitant but he falls for Deepthi (Chandini). As time progresses, the duo turn friends and this indeed turns into love. Deepthi’s brother Rama Raju (Sunil) rejects Deepthi’s choice and the rest of Colour Photo is all about the hurdles the youngsters face to win their love.

Colour Photo comes with a vintage touch and the locations suit the film well. But the film happens on a slow pace which may not appeal to many. The first half is passable but the second half is boring, dragged. The entire film is predictable to the core. The college episodes should have been better and they remind us about several old films that are set in similar backdrop. The dialogues of Colour Photo are good. Suhas and Chandini Chowdary are the film’s major strength. They slipped well into the roles and carried the film.

Sunil gets enough space during the second half after the first half is filled with college romance and entertainment. The climax episodes are emotional after the second half looks dragged. Suhas did a perfect job as Jayakrishna and Chandini fits well in the role of Deepthi. Kaala Bhairava’s music and background score are the other strengths of the film. Viva Harsha brings out enough smiles in Colour Photo. All the other technical aspects are just ok. Sandeep Raj as a director has been decent but he should have focused well on the narration. His dialogues are good.

Colour Photo has its dull and proud moments. The performances and music are the greatest strengths of this predictable romantic saga.