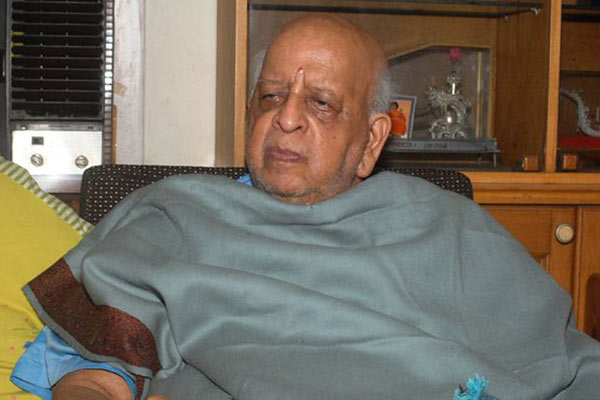 Condolences poured in over the death of former Chief Election Commissioner of India T.N. Seshan, who passed away on Sunday at age 86.

Union Road Transport Minister Nitin Gadkari tweeted: “Saddened by the demise of Shri TN Seshan. He was a true legend. His contribution towards election reforms will be the guiding light for years to come. My deepest condolences. Om Shanti!”

West Bengal Chief Minister Mamata Banerjee said in a statement: “Saddened to know about the demise of T.N. Seshan Ji, a stalwart for free and fair elections. His legendary contribution to democracy will be always remembered. My condolences to his family and many admirers.”

Puducherry Lt. Governor Kiran Bedi tweeted: “Just been informed Mr T.N. Seshan is no more. I am informed he was ailing for some time.

He was an epitome of a decisive public servant who believed in constant improvement dynamically. He was a very warm hearted person. One with a tough exterior with a very humane/soft interior.”

Former CEC S.Y. Quraishi tweeted: “Sad to announce that Shri TN Seshan passed away a short while ago. He was a true legend and a guiding force for all his successors. I pray for peace to his soul.”

Congress leader and MP Shashi Tharoor tweeted: “Sad that former ChiefElectionCommissioner TN Seshan has passed away in Chennai. He was my father’s classmate at VictoriaCollege Palakkad… a courageous & crusty boss who asserted the Election Commission’s autonomy & authority as no CEC before him had done. A pillar of our democracy.”

Devendra Fadnavis, caretaker CM of Maharashtra, tweeted: “Sad to know about the demise of Former Chief Election Commissioner Shri T. N. Seshan ji. Known for electoral reforms, as a CEC he set a precedent for his successors. India will always remember him as a great administrator. My deepest condolences to his family, friends, followers!”

The IAS Association tweeted: “The man who reformed our Electoral System as we know today is no more. Shri T N Seshan (1955 TN) – served the nation in various capacities and is a true role model for all of us. His demise is a great loss for the nation & society. Condolences.

“Sad day indeed. We have lost two of our best senior members – T.N. Seshan (1955) and P S Krishnan (1956). True role models – they set standards of public service we all aspire for. Loss for nation & society. Deepest Condolences to family members,” it posted.

Sheyphali Sharan, the spokesperson of the ECI, tweeted: “The Election Commission of India deeply mourns the passing away of Sh TN Seshan. Expressing his condolences, CEC Sh Sunil Arora said “T N Seshan was a legend. He will always be a source of inspiration to us and all CECs & ECs to come”.

Election Commissioner Ashok Lavasa tweeted: “The passing away of Sh. Seshan marks the end of an era. He upheld the dignity of his office & earned respect by his fierce independence & effective functioning. A goalpost for his successors, he continues to be a benchmark for the constitutional framework of a thriving democracy.”

Congress leader Salman Anees Soz posted: “In many respects, T.N. Seshan taught us what independent institutions could look like in India. Even as institutional integrity has come under attack, Mr. Seshan’s legacy remains for all those who care to follow it. RIP ”

Former union minister Pon Radhakrishnan posted: “Deeply saddened to hear Shri TN Seshan passed away a short while ago. He was a true legend and a guiding force for all his successors in Indian EC. The Country will remember with gratitude to TN Seshan for his outstanding contribution to EC.”

The Mumbai Congress tweeted: “We are saddened by the demise of former CEC, Shri TN Seshan. His contribution to upholding the democratic values of India as a bureaucrat and the Chief Election Commissioner will always be remembered with respect. Our condolences to his family and friends.”