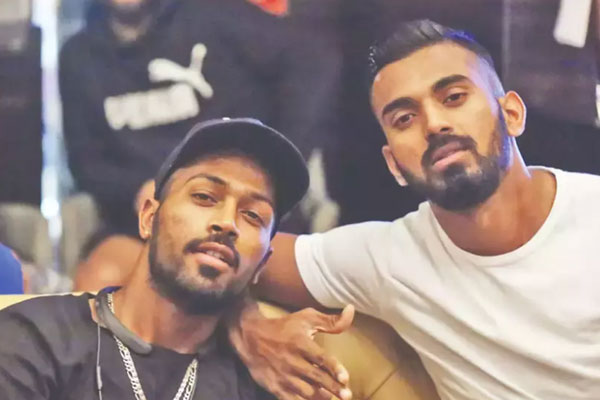 The participation of all-rounder Hardik Pandya and opener Lokesh Rahul in the three-ODI series against Australia, starting in Sydney on Saturday, has been thrown into jeopardy as the duo have been suspended for their controversial comments in a television talk show.

The decision comes after Diana Edulji, the woman member of the Supreme Court-appointed Committee of Administrators (CoA), advocated suspension of the duo until the quantum of sentence is announced.

CoA chairman Vinod Rai had earlier recommended a two-ODI ban for the duo but Diana decided to seek legal opinion before taking any action.

“Based on legal opinion and till the time the final procedure is laid down to address this issue, will recommend that a communication be sent to the concerned players and the team immediately,” Diana wrote in an email, accessed by IANS.

“It will be imperative that the players be put under suspension till a further course of action is decided for this misconduct,” the mail added.

In this regard, a five-member Apex Council comprising the elected office bearers — President, Vice President, Secretary, Joint Secretary and Treasurer — has been formed to conduct the probe.

Under such a scenario, India will be compelled to take the field without Pandya and Rahul in the series opener at the Sydney Cricket Ground (SCG).

According to a BCCI source, Rahul isn’t in the first choice playing XI while Pandya is also out of at least the first ODI even as the team management is still awaiting a final call.

Earlier on Friday, breaking his silence on the allegedly sexist comments made by Pandya and Rahul, India skipper Virat Kohli denounced the duo’s statements and said the team management is still waiting for a decision on the duo.

Terming the comments as “inappropriate”, the 30-year-old skipper said the belief in the dressing room is completely different from the individual comments of the two young players.

“We as the Indian cricket team and responsible cricketers do not support such views,” Kohli said during the pre-match press conference in Sydney.

“The two concerned players have realised what has gone wrong and they have understood the magnitude of what has happened,” he added.

“You don’t have control over these things so you have to address it the way it unfolds. That’s how we are looking at it, the combinations will have to be looked at when the decision comes out and from there on we’ll see what needs to be done about the whole situation,” he added.