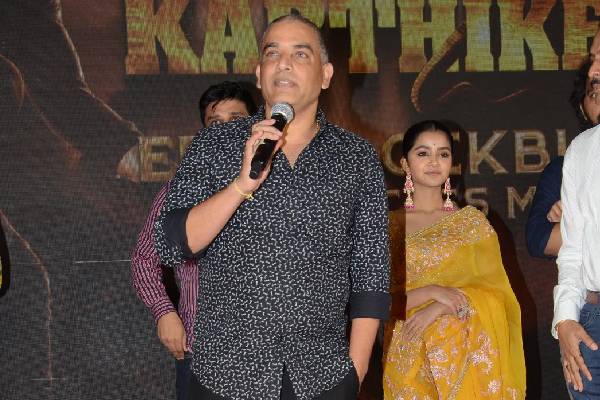 Top producer Dil Raju is a successful producer and distributor. He was dragged into several controversies and he is a man who stays tight-lipped and rarely responds for the rumors. During the success meet of Nikhil’s Karthikeya 2, Dil Raju took the stage and turned emotional. He slammed a gossip portal which happens to be the reason for the speculations. He challenged them to meet him in person for any clarity in the future. “My name was dragged and I was made the reason for the delay in the release of Karthikeya 2. I have been meeting the producers, hero Nikhil and director Chandoo Mondeti about the release of Karthikeya 2. As there was a delay in Thank You, I requested the team of Karthikeya 2 to move out from July 22nd release and they agreed for the same” told Dil Raju.

“With the permission of the producers, I am here to issue a clarification. There were a lot of rumors about me. Nikhil has been discussing about the release of Karthikeya 2 from sometime. They decided to release Karthikeya 2 during the Independence Day weekend. I suggested them to avoid clash and move the film by a day. There are unwanted rumors about the same. Most of them feel that there is no unity between us. But 99 percent of the time, we discuss and plan the releases to avoid a clash. We have averted several clashes. Nobody is here to kill films. There has to be a minimum commonsense for those who write and read those rumors. It is being done for clicks or subscribers. I am a calm-going person and I never entertained clashes” told Dil Raju.

“If there is no healthy relationship, I will not be invited to this success meet. People Media Factory is producing eight films currently and it is the leading production house. Who will try to have a tiff with the top production house of Tollywood? The facts should be verified before writing or publishing a piece of news. Karthikeya 2 collected Rs 4 crores in Nizam over the weekend when there are multiple films screened. Never throw stones on others. Dil Raju is saleable and they are writing about me. I love films and I never kill or spoil any film. Please shut your mouths if you are not aware of the facts” concluded Dil Raju.