Jana Senani has been suffering from back pain ever since Gabbar Singh shooting. He has personally clarified this in the past. The issue came to the fore once again. Pawan has started increasing his political activities by taking part in protest programmes, round table conferences and fight against the governments. However, he is not able now to attend the round table on media ban in AP because of the return of back pain.

This has raised concerns among the Sainiks whether Pawan is not so serious and whether he is toning down his political activism. Clarifying to this, Pawan tweeted that certain health issues are bothering him but his party would continue to fight for the public cause. His party representatives would take part in the round table on media ban. Pawan told his fans that the stress during the last election worsened his back pain. Doctors are advising spine surgery but Pawan wants to just rely on the traditional medicine. Senani is known for his firm beliefs to which he sticks till the last. Health is no exception. 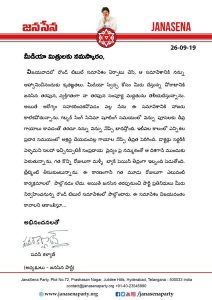