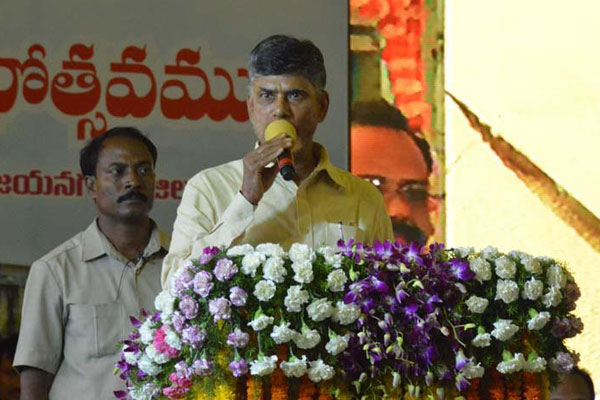 Chief minister Chadrababu Naidu’s public announcement that the government would identify about 17,000 acres in East and West Godavari districts to make room for industries has created furor among the environmentalists and public spirited activists. While talking to the people in Dwaraka Tirumala, Naidu revealed his plan to industrialize the two agriculture-rich and rice growing districts.He said the two district did not get industrialized because of non-availability of land. To overcome this, Naidu announced, the state government, would soon denotify the forest land to an extent of 17,000 acres.
It created loud protest from the environmentalists and activists.
Professor Chigurupati Ramachandraia of centre for economic and social sciences (CESS), Hyderabad, took strong objection to the proposal to denotify the forest land to make room for industries.

According to Ramachandraiah, a popular voice against the anti-people projects in the state for over 15 years, if the forest land is denotified and industries are set up, wonderful ecological balance, naturally evolved through ages, will get disturbed with serious consequences for the people of two districts. He demanded the state not to resort to the massacre of sensitive coastal environment.

The reasons Prof. Ramachandraiah cites to oppose the denotification of forest to facilitate industries are:

1. The area is thickly populated geography and is coastal ecology.

2. The two districts are known for their high degree of agriculture and allied activities especially fisheries.

4. There is a fine balance between the density of population , high density agriculture and coastal activities. As the people are heavily dependent on the agriculture, any attempt to locate industries in the agro-fisheries zone would disturb the balance naturally evolved for ages.

5. Location of industries is not a standard solution for all districts. Industries should go to the area which suits them and agriculture should be allowed in the agro-ecological region. Any bungling in this division will lead to a disaster.

Dr S Jeevananda Reddy, former chief technical advisor, World Meteorological Organization (WMO/UN).
Reddy also expressed similar sentiment and opposed the proposal to denotify the forest lands in the name of establishing Industries in West and East Godavari district. ” There should be clarity on establishing industries. Industries are two types: location specific and non-location specific. If the government follows this principle in locating the industries half of the problems are solved,” he said . He said nobody would oppose if the government set up location specific industries in Agro-rich zones. ” In the name of industrializing the zone, without applying mind whether they are needed or not, if government set up industries in rice growing districts it will lead to serious contamination,” he said. Reddy further added that, “primary motive of industry is benefit to the individual, who sets up the industry, and for such industries, government should not resort to denotification of forests.

Dr Sarma strongly opposed the move. According to Sarma, chief minister Naidu is resorting to denotification of forest land to set up industrial units as he feared resentment among farmers.
He urged the union government to reject the proposal to denotify the land from AP government outright. “The government decided to de-notify 16,000 acres of forest land to accommodate several industrial units in West Godavari district on the ostensible ground that farmers are resisting acquisition of agricultural lands and, therefore, the industry should be handed over the required extent of forest land. This runs counter to the State’s obligation under Article 48A of the Constitution, the National Environment Policy approved by the Union Cabinet , the forest conservation laws enacted by the legislature and the norms of forest conservation and the Doctrine of Public Trust stipulated by Hon’ble Supreme Court from time to time.” Sarma said.