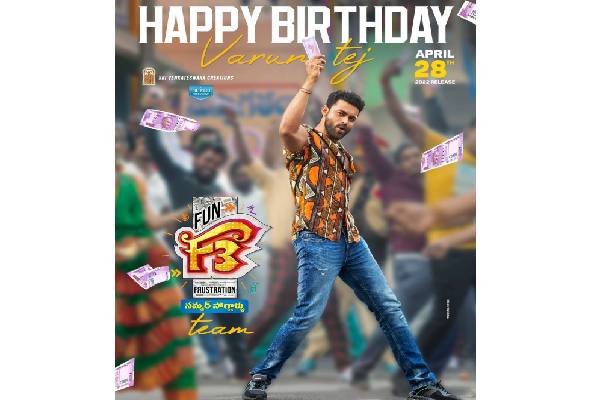 The unit of director Anil Ravipudi’s eagerly-awaited fun-filled entertainer ‘F3’, featuring actors Venkatesh and Varun Tej in the lead, on Wednesday announced that they were advancing the release of the film by a day to April 28 this year.

Wishing actor Varun Tej, who plays one of the leads of the film, on his birthday, the team released a new poster of the film featuring him on Wednesday. The new poster had the release date of the film as April 28.

The unit had earlier announced that the film would release on April 29.

As the story revolves around cash, the new poster of the film had currency notes in it. Varun Tej too is seen holding a Rs 2,000 note in his hand.

‘F2’ emerged a winner for Sankranthi in 2019 and sources say ‘F3’ will be a laugh riot that will release in theatres in the summer of 2022.

The presence of Nata Kireeti Rajendra Prasad, Sunil and others promise additional entertainment. Tamannaah Bhatia and Mehreen Pirzada play fun and glamorous roles in the movie and Sonal Chauhan has been roped in as the third female lead.

Music director Devi Sri Prasad, who delivered an album of chartbusters for ‘F2’, is scoring the music for ‘F3’ as well. Sai Sriram cranks the camera, while Tammiraju is the editor.