AP CM Jaganmohan Reddy visited Delhi and met with PM Modi. But, he has not addressed the press anywhere about the outcome of his visit. The TDP launched an attack on this now. Former Finance Minister Yanamala Ramakrishnudu said that AP CM was making frequent visits to Delhi out of fear of his illegal assets cases pending before the CBI Special Court. Jagan was literally scared of the impending prospects of having to appear before the court on a daily basis in the wake of the proposal for speedy disposal of cases against people’s representatives. It is well known that half of the 25 pending cases before the Central Bureau of Investigation (CBI) and the Enforcement Directorate (ED) were pertaining to Mr. Jagan Reddy.

Mr. Ramakrishnudu said that the YCP leaders were terrified of the High Court’s order for disposing of the cases against the elected leaders within 9 months. The secret meetings with Central leaders were only for selfish gains. Jagan Reddy was not able to hold joint press conferences with the Union Ministers. The AP CM was not telling the people what he asked and what the Centre has given. Even the YCP MPs were not holding any press conference to tell the people about the CM’s Delhi visit outcomes. The secrets behind the news leaks and formality sake press releases should be revealed to the people. They totally forgot about the pending promises in the Reorganisation Act. In just 17 months, Jagan Reddy made 10 trips to Delhi. The AP CM was only bothered about his future but not about the wellbeing of the people of the State. 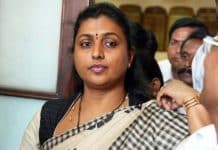 Will Roja be disappointed again?