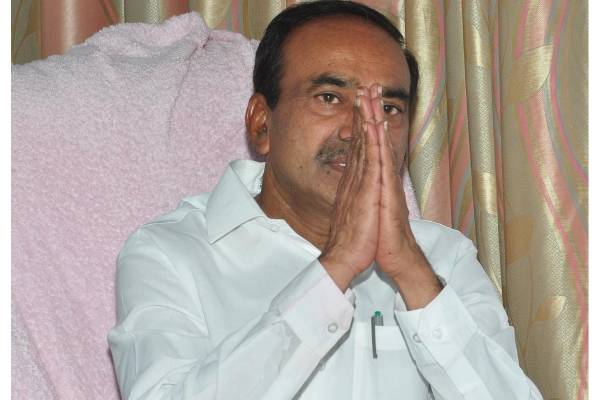 Etela joined BJP with the hope that the BJP national leadership will ensure the early conduct of bypoll for Huzurabad Assembly seat vacated by him.

Rajender specifically brought to the notice of BJP national leadership that his victory will be certain if bypolls are held early and it will be an advantage for TRS if they are delayed.

The festival season in Telangana ends with Diwali on November 4. This would mean that Etela has to wait till November-end for Huzurabad bypoll.

Etela has already incurred huge expenditure to keep his followers and cadre intact since he was sacked from KCR’s cabinet in May. The TRS is luring leaders and cadre away from him by offering good packages and posts.

In the last four months, Etela’s funds have reportedly dried up to maintain his followers and cadre in Huzurabad and is struggling to mobilise more funds to maintain this tempo for another three months.

Etela reportedly told BJP leaders that CM KCR has the advantage of spending thousands of crores of public money in the name of development programmes and welfare schemes like Dalit Bandhu in Huzurabad since May and he too was forced to spend crores of rupees to maintain his followers and cadre.

Etela is said to have asked BJP leaders how can he compete with KCR in funds and spend more funds personally if election is delayed further. He said all his money will go down the drain even if he spends because TRS will win if elections are delayed.