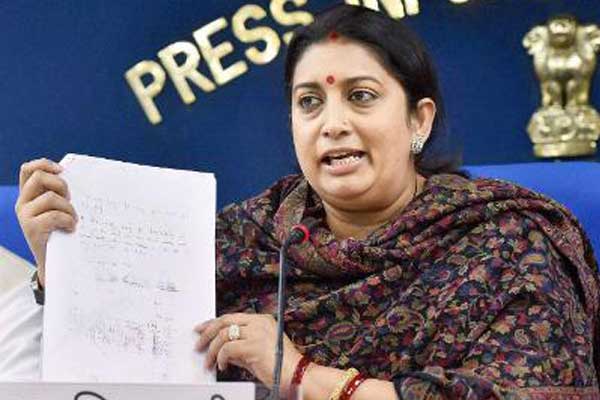 The GHMC elections have taken a national political hue with the central BJP leaders aggressively canvassing for its party leaders. Both the ruling TRS and BJP are raking up issues of national importance rather than focusing on local issues.

On Wednesday, Union Minister Smriti Iran tore into the TRS camp blaming the unholy alliance between the ruling party and Asaduddin Owaisi-led AIMIM for the illegal stay of Rohingyas in Hyderabad. The Union Minister alleged that the AIMIM party leaders got illegal immigrants enlisted in the voters’ list and that the TRS government had failed to initiate any action against them.

.The Union Minister claimed that more than 75,000 Rohingya refugees are residing in Hyderabad while enjoying full support from AIMIM and the ruling TRS. “Our party’s stand and the stand of the union government has been consistent against illegal immigration. We need to protect the rights of every Indian citizen and it is our onerous responsibility to ensure that the taxpayers’ money goes to the deserving Indians,” she said.

Further, she said thousands of people have sacrificed their lives for the cause of Telangana state and that she is deeply saddened by the family rule of KCR. The Union minister also said that the TRS is rattled by the presence of BJP reason why the Telangana government was using the police machinery to arrest its leaders and foist false cases.

On Tuesday, BJP president Bandi Sanjay Kumar said that TRS and AIMIM were trying to win GHMC polls with Rohingyas, Pakistani, and Afghanistani voters and warned that surgical strikes in Old City once the BJP wins the GHMC polls triggering an uproar from the TRS and the AIMIM.