Switch to: తెలుగు
Home Press Releases Grand premiere of Valmiki across the US today 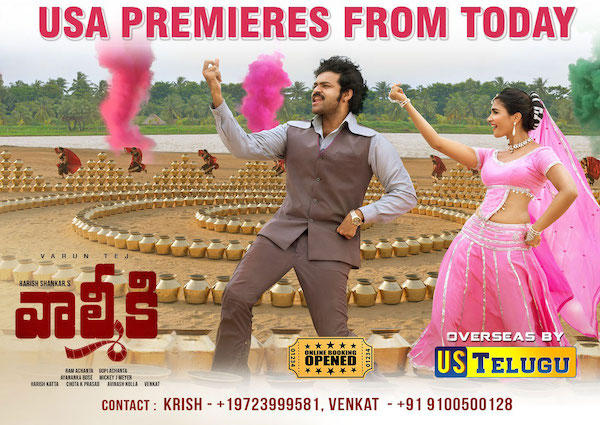 The wait for the most-awaited mass entertainer of the year finally comes to an end! Varun Tej-starrer Valmiki is set to have a grand release worldwide on September 20th.

Leading distributor of Indian cinema overseas, US Telugu, is excited to bring this film to the audiences of the US! Grand premieres are being organized for the film across the States on today!

Directed by Harish Shankar who always takes mass appeal to the next level, this film is going to be quite a treat to the audiences in every sense! Already the trailer created quite the buzz with its interesting dialogues which clocked over 5 million views in no time.

Another major highlight of the film is surely going to be the music by Mickey J. Meyer. While Dimple Hayathi’s sizzling moves in the special song Jarra Jarra have become the new favorite of the Telugu audience, the remix song Yelluvachi Godaramma is also drawing a great deal of interest.

Watch it in theatres near to you today! Book your tickets now.