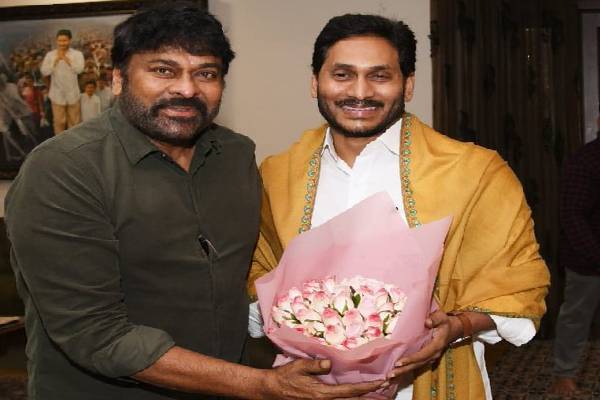 Is YS Jagan planning to send Megastar Chiranjeevi to Rajya Sabha on the YSRCP ticket? The rumour mill was abuzz on this all through Thursday. And there were strong reasons for this. It was clear from the beginning that film industry stand-off was not the main agenda. Chiru himself has categorically said that he was meeting Jagan not as “Industry Pedda (elder),” but as “Industry Bidda (son of the Industry).” Thus, he has amply indicated that industry issues are not at the top of the list.

If Chiru is sent to Rajya Sabha, it would affect the Pawan Kalyan-Chandrababu equations. Amid the talk of Chandrababu courting Pawan Kalyan, this would be a political masterstroke and Pawan’s case would become considerably weakened. Jagan can now lay claim to a bigger pie in the Kapu cake. The Kapus would now sail with both Jagan and Pawan and leave Chandrababu in the lurch.

Interestingly, Chiru’s meet comes after days of RGV meeting Cinematography minister Perni Nani. What transpired at this meeting has not been taken up for discussion during the Chiru-Jagan meet. Now, sources say that Jagan could next invite Mohan Babu, who is a close relative of the YS family. Mohan Babu’s son Manchu Vishnu is the president of MAA.

Thus, there is a clear plan to drive a wedge in the Telugu film industry. By creating a pro-Jagan section within the industry, the Jagan government is planning to keep the industry divided. Film industry leaders like Nag and Mahesh Babu too are playing safe. Thus, Jagan will encourage these personalities too against the powerful cabal that is leading the industry.