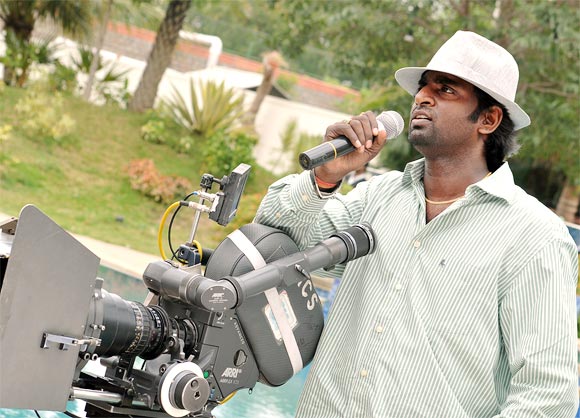 Senthil is a marvellous technician. The low profile cinematographer had been with Rajamouli for most of his movies and helped the latter in transforming his craft to a visual wonder. Baahubali is Senthil’s crowning glory and throughout the conversation, the man stresses that it is a team effort and that speaks volumes about his humility. The contribution of a cinematographer from the pre production to the wrapping up of the film is monumental. Senthil draws a deep breath as he says it isn’t over yet and he needs to finish Bahubali II before thinking of a Bollywood debut.

It has been a 3 year journey, how does it feel?

We are awaiting the release tomorrow. We have done our part and now the people have to give their verdict. I never expected this type of hype though we knew we were making a big budget movie. This rush for the tickets is something I have never seen. The expectations are so much that I have begun feeling a bit sceptical if we will be able to reach it or not. I am tensed. The second part will be more challenging. The first will become the bench mark but the biggest challenge will be to exceed the first part.

You have been with Rajamouli in most of his films. How is this film different?

I have been associated with Rajamouli since Sye. I have seen a constant growth in his story telling and use of technology which became big with Eega. The scale and budget has seen an escalation and we have attempted what no one ever did in Indian cinema. It is purely a fictitious film where we tried showcasing traditions like we saw in Crouching Tiger, Hidden Dragon etc and other Chinese films.

What about this film touching people so much?

Whatever you have seen is a trailer is a visual. Generally when you see it, the connection happens. The cast and the previous film of the director and is being promoted as India’s expensive film. The emotional content is what might strike. So much of homework has gone into it. We were watching so many films to get some reference and show something different. Our concept artistes were working on it and it was complete team work. We were studying and wondering how Hollywood people must have used maximum numbers to get the real war feel. We trained 2000 people. My challenge was to capture director’s vision. The art director, costume designer’s work and finally the emotion that the artiste is delivering, needs to be captured and presented in a grand scale without losing any essence in any frame. It was a tremendous pressure as every frame had to show the grandeur, emotion and detailing that other departments have contributed and then, giving it to the visual effects department to get enhanced.

How long was the shoot?

The shoot happened for 350 days spread across two years, shot in all the seasons. We were equipped with it and shot in minus ten temperatures in Bulgaria. We shot from extreme heat in Hyderabad to continuous rains in Mahabaleshwar. The fog was major challenge as it was ten feet away in Mahabaleshwar and Bulgaria. The camera helped me in seeing in low light conditions. We could hardly see anything, but the big crew was stationed and we couldn’t stop shoot. We had to shoot in worst weather conditions and still give it a good look.

Is giving a personal touch to the frames important?
Giving a personal touch is deviating; it would be a confusion. The basic job is to help the director tell his story in the best possible way. I need to blur my vision into his and  through my craft, deliver whatever best I can. It is finally about story telling. Be it light or the camera movement, every film comes with an inbuilt style and visual approach. We need to find out from the story and deliver it. For war scenes, we did extensive research and story boarding before i.e pre production. Before actual shoot, 2000 people were trained so that they don’t look comical on screen for the battle sequences and the training was shot on video cameras to get right angles. The idea is that once costumes come on board, it shouldn’t go wrong. We then edited, saw the footage and actually went to shoot. On the location, it is a different scene. The  cinematographer goes by his instinct, despite all the preparation on location. What he instinctively feels makes a difference. We have reference point to fall back on.
How are we different from international standards?
It is sad we are comparing with international standards, they are far superior. Perhaps in content, we can compete them but technology wise, they are far superior. It is a blessing to have Ruhi as my wife. Since three years, she was prepared to have no entertainment and made all the sacrifice. My wife has been very cooperative and has been taking care of the domestic aspects. It is because of her that I had zero tension. If I get an offer from Bollywood, why wouldn’t I take it up? It is not the next level. As of now we are doing Bahubali II. This is once in a lifetime opportunity and I want to focus on this.